Germany is more popular than ever among students from all over the world: International diversity shapes the face of life and learning in the universities. About every second foreign student comes from Europe.

Never before have there been so many: 321,569 foreign students were enrolled at Germany tertiary education institutions for the winter semester 2014-5, or so the German Federal Statistics Office reports. Their share of the total has almost doubled since 1993. The single largest group of international students comes from European countries, in fact about every second one (44 percent). According to a report by “Wissenschaft Weltoffen” every fourth foreign student comes from east Europe, and just short of every fifth from west Europe.

There are many reasons why studying in Germany is appealing precisely for young people from the European Union: They can travel without border controls, relocate to their place of study without a lot of red tape, and enjoy the fact that countless degrees are mutually recognised within the EU. Moreover study credits obtained during a guest semester in Germany are usually easily integrated into the course of study being pursued at university back home.

The EU’s Erasmus+ programme supports not only study-related stays abroad but also internships, vocational training and guest lecturers within Europe. In terms of popularity, Germany places second on a European comparison, topped only by Great Britain. In 2013, a total of 77,500 students from other European countries spent a guest semester in Germany, and about 104,000 students from Germany were enrolled in tertiary education institutions in other European countries. Since 2000 the number of mobile students in Europe has almost doubled, rocketing from 950,000 to 1.8 million in 2013.

So what hopes and expectations do young students from Europe have? What does the EU mean to them and how do they get involved? We asked two students, one from Georgia, the other from Sweden.

“Europe is a place Georgians have always yearned to visit” 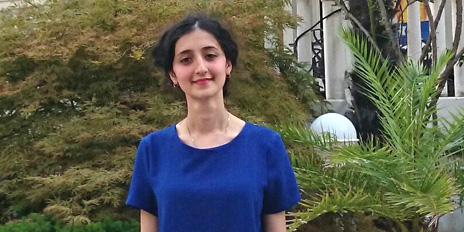 Natali Gogiashvili is 24 years old and is studying Law at the Ivane Javakhishvili Tbilisi State University, Georgia. She is in her third semester on her Master’s programme and is currently an Erasmus student at European University Viadrina in Frankfurt an der Oder, where the emphasis is on international diversity and European accessibility. With a total of 6,500 students from more than 80 different countries, the Viadrina is one of the most international universities in Germany and terms itself the “specialist for borders and cross-border spaces”.

What does Europe mean for you?

Europa is a place Georgians have always yearned to visit. Europe is a large, successful continent that guarantees peace, freedom and democracy, that respects and defends human rights such as equal opportunities, sexual preferences, freedom of opinion and the freedom of the press. On this continent you can feel good and safe.

How is the EU viewed in your home country?

After the collapse of the Soviet Union, Georgia started aligning itself to the West. In my home country everyone is only too aware of the very many opportunities the European Union offers: It enables us to travel without complications, to work abroad, to study without problems, to swiftly and easily get to know new cultures, to swap ideas with other foreigners and to be tolerant toward other nations. And the EU is also appealing to Georgia from an economic perspective. The EU’s economic stability can help solve the economic problems in my home country.

What does it mean to you to study at the Viadrina and what do you hope this will give you?

The legal system in Georgia is based on German law. For me as a prospective lawyer it is exciting to compare the regulations, the jurisprudence and the way things are taught. Here in Viardina I have also learned that you have to be tolerant toward other nationalities. Frankfurt/Oder is a small town and very pleasant as a place to study. But I nevertheless prefer to spend my free time in Berlin.

Do you feel like a European among Europeans, or sometimes as a foreigner after all?

I usually feel like a European in Germany, because the difference in values between my home country and Germany is not that great.

“My dream is to travel throughout Europe”

Linus Nilsson, 21, studies German in Lund and is writing his Bachelor’s thesis. In 2015 he was an Erasmus student in Giessen and became involved in the “Europa macht Schule” project: He prepared young people from a vocational college for their class trip to Sweden.

What does Europe mean to you?

For me, Europe is my “large home” and I feel that I belong here. My dream is to travel throughout Europe and to see all the cultural and social differences with my own eyes. My outlook on Europe has always been positive. And that feeling grew even stronger during my time in Germany. I simply got to know things even better.

What would you wish for Europe?

Coherence and acceptance. Our differences should not stop us from progressing and developing things. We can learn so much from one another! Which is why knowledge is so important, namely a knowledge of Europe’s different countries, peoples and cultures.

Your country is a member of the European Union. What does that mean for you?

As a young person I above all discern the opportunities the EU offers. There are some aspects of the EU I do not find so good and they should, I believe, be changed. However, the EU prompts us to think about the big common issues and how we can tackle things. We set ourselves goals we wish to realise and find similarities and shared values among ourselves. In my home country I have the feeling the majority is against the EU, but no the young people.

I initially thought first and foremost of the fun, but I then understood what the real thrust of things was. Such projects enable you to get an idea of another country and you discover the similarities and differences to your own country in that way. You always have opinions on a foreign country, even though much of it is driven by cliché. Projects such as “Europa macht Schule” can help turn prejudices into understanding and acceptance, maybe even into interest.

What were your experiences in Germany?

The most important thing was the contact to other exchange students. We learned a lot from one another, above all about the culture and language. I didn’t feel like a foreigner, but like a European, and at the same time like a human and inhabitant of the Earth, since there were no Europeans in my class. I really felt at ease and even at home.

The Viadrina in Frankfurt an der Oder