Research in the once eternal ice

Extraordinary training: The German-Canadian research and training experience programme “ArcTrain” enables interdisciplinary research into climate change and the future of the Arctic.

No other region in the world is warming up as quickly, as a result of climate change, as the Arctic. Researchers are now certain that this will lead to the ice sheets melting, with this melted ice influencing currents in the North Atlantic. The scientists on the German-Canadian research and training experience programme “ArcTrain” are investigating the impacts of this change. They aim to analyse which processes emerge between the ice, the ocean, and the atmosphere in the Canadian Arctic.

Participants on the German side of the programme, which was launched in late 2013, include scientists from the Centre for Marine Environmental Sciences (MARUM) at the University of Bremen and the Alfred Wegener Institute for Polar and Marine Research (AWI), and on the Canadian side scientists from eight universities. “The training programme combines the strength in marine geosciences and environmental physics in Bremen with the specialist knowledge and expertise in modelling sea ice and ice sheets of our Canadian partners,” says Michal Kucera, spokesman for the German part of ArcTrain and Professor of Micropalaeontology and Palaeoceanography at MARUM. Cooperation with the North American partners was an obvious choice, he added, as Canada has direct access to the Arctic and places great importance on the region’s future. “Our Canadian partners are able to contribute their knowledge of the region to the programme,” Kucera says. This is particularly beneficial, for example, on ArcTrain expeditions to the central Arctic. On the expeditions sediment cores are extracted which help decipher the history of the region and analyse the transport of water masses and heat in the North Atlantic. 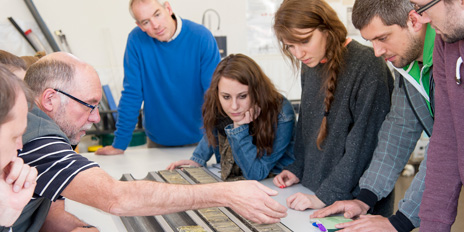 Doctoral students taking part in the programme, which is funded by the German Research Foundation (DFG) and the Canadian National Science and Engineering Research Council (NSERC), are the beneficiaries of the training in the region. As Anne de Vernal, spokeswoman of the Canadian part of ArcTrain and Professor at the University of Québec in Montréal, explains, “The students’ training takes place in a multi-disciplinary, multi-institutional, and multi-lingual environment with access to a significant research infrastructure and specialised expertise in laboratories and at sea.” As such, thanks to ArcTrain, the Canadian doctoral students have an opportunity to gain experience on two German research ships, namely the “Maria S. Merian” and the ice breaker “Polarstern”, the most important tool in German polar research. The doctoral students from both countries come from a wide range of disciplines, for example biology, physics, geology, and remote sensing. April 2017 saw the first ArcTrain doctoral student successfully defend his thesis, on which he had spent three-and-a-half years researching new insights into the transfer of wind energy in oceans.

There are currently 39 doctoral students from Germany and Canada taking part in ArcTrain. “We are training a whole generation of Arctic researchers,” Michal Kucera, who regards the interdisciplinary background of the young scientists as an important advantage, is pleased to report. “Our graduates are not only experts in their particular field; they are also familiar with the work conducted by the other students on the programme.”

Public interest in what scientists are researching in the Arctic has increased considerably. Only recently a Canadian TV channel shot footage for a documentary in Bremen and Bremerhaven. For the ArcTrain spokesman Kucera, media work is important: “It is our duty to explain the changes in the Arctic to those people affected and to the public at large,” he says. The doctoral students could well also benefit from this. “They learn how to deal with the media,” Kucera says. When they finish their doctorate it could be important for their professional life, regardless of whether they pursue a career in academia, public authorities, or business, because there will be interest in what is being researched in the Arctic and just what the future of the eternal ice has in store for some time to come.

These websites show how exciting, many-facetted and well-organized research is in Germany. Explore institutions, locations and focuses.
Read more