There are German schools in 71 different countries. They do exemplary educational work. As can be seen from the highly endowed awards now bestowed on 11 German international schools.

Two sets of honours are due within the week: On 1 June the German Federal Foreign Office in Berlin will be honouring the best inclusion and vocational training projects. And on 29 May, the German International School in Rio de Janeiro placed among the best in the German Schools Prize 2017.

German international schools the world over are there to support the children of Germans who are working abroad. Moreover, they offer children from the respective host country or from other cultures an opportunity to familiarize themselves with Germany, the culture and the language. German international schools are thus places of encounter and intercultural dialogue. 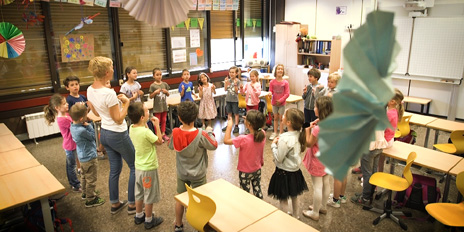 For the third time now, the Federal Foreign Office has awarded prizes to German international schools in the categories “Learning and living together” and “Vocations through schooling”. Both inclusion and vocational education help young people best develop their full potential.

“German international schools help qualify the skilled staff of tomorrow. They not only bring highly motivated students and trainees to Germany, but also train […] skilled staff for local and international corporations, at the same time strongly stimulating the school system in their respective country,” explains the Federal Foreign Office.

The principle of inclusion, of joint classes for children with and without disabilities, is still new in some countries. German international schools are setting a good example in this regard. Ulla Schmidt, Vice President of the Bundestag and patron of the “Learning and living together” competition, points out that the schools’ commitment to social inclusion was also reflected in the choice of winners: “In other words, they very intensively advocate heterogeneity in their social and cultural context and in particular do justice to the respective learning needs of the pupils.”

“Learning and living together” Prize Winners

Since 2006 the Robert Bosch Foundation and the Heidehof Foundation have been honouring Germany’s best schools. The foundations reward outstanding teaching achievements – with prize money totalling no less than 265,000 Euros. The judging is based on six criteria: achievement, approach to diversity, quality of instruction, responsibility, school life, and school as a learning institution.

For two years now, German international schools have also been eligible to take part. The German School Rio de Janeiro won over the jury with its inclusive concept. It was one of five 2nd Prize winners of the German School Prize 2017 and thus won 25,000 Euros. The German School Boston also made it into the final round of the best 14 schools and received prize money of 5,000 Euros. German Federal Chancellor Angela Merkel presented the representatives of the schools with their prizes on 29 May.

Find out today what society will need tomorrow. This is where you will discover who looks after such issues as equality of opportunity and international competitiveness in the educational sector.