What is hidden under the carpet of the Foreign Minister’s office? How do politicians work? In a film and in short interviews, visitors tell what they discovered at the Foreign Office’s Open House.

On 27 and 28 August 2016, in summer temperatures of over 32 degrees, several thousand visitors turned out for the Federal Foreign Office’s Open House. They informed themselves about foreign policy by taking a look behind the scenes and dropped in at the office of Federal Foreign Minister Frank-Walter Steinmeier. We talked to visitors about why they came to the Foreign Office and what impressed them most. 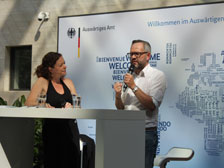 Politics and democracy thrive on openness. I think most people don’t know how politicians, diplomats and the Foreign Minister actually work. How are negotiations conducted? About what issues do we really care? An Open House gives citizens the opportunity to look at what we do every day, what we can do and what we perhaps can’t do. In this respect I’m very thankful there are such events. It’s a very hot day today and yet very many people have come here; I find that marvellous.

I’ve been living in Germany for eight months and been studying for three months at the Kiron University. That’s an institution which gives refugees a chance to do university studies: two years online, then at a partner university. On Facebook I learned of the Shabab Talk event with Jaafar Abdul Karim at the Foreign Office. Refugees can enter into discussion there with politicians. I came here because I’m interested in the subject. It’s really great that there are some politicians here with whom you can talk and exchange. Here you can see what those “up there” are doing. 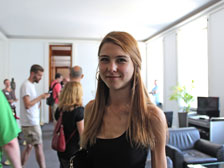 You usually can’t get into the Foreign Office and the other ministries, so the Open House is a great opportunity. I think it’s very interesting not only for politically interested people but also everyone else. I didn’t realize you could actually look into the offices – that’s really great! You don’t really have any idea of what the office of a high official looks like. There are so many events here – speeches, tours, guided tours, discussions; I think it’s very well done. 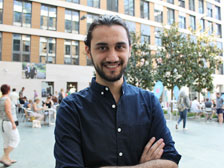 Munzer Khattab from Syria has lived in Berlin for a year

I attended the Shabab Talk discussion and have to say I’m very positive about it. We discussed problems and solutions concerning the Syrian crisis and refugee issues, and we agreed that we have to do something, not just sit by and watch. Open House Days are important because everyone should know what’s happening in parliament. It was very interesting. I met many open and receptive people, talked with politicians and saw this beautiful building from inside. 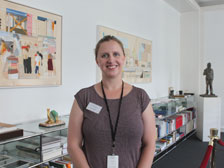 Ulrike Borrmann, attaché at the Foreign Office for the higher civil service

I had the pleasure of showing the minister’s office at the Open House. You notice a secret hidden in the office when you walk over the carpet: it’s somewhat uneven in places. When the former Federal Foreign Minister Joschka Fischer moved into this office, he had the floor laid with terracotta tiles, which are still hidden under the carpet. Visitors ask the most questions about the many books here in the office and about the statue of Willy Brandt, which is a replica of the large statue at the Willy Brandt Haus in Berlin, the SPD party headquarters. When the minister is here, he in fact works in this room. Many visitors also ask about that. 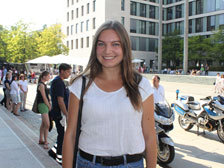 I like the Foreign Office very much. I’m visiting Berlin and for me, as a Pole, it’s very interesting to see how it all looks. I’m surprised there’s such a thing as an Open House when visitors can look at everything. I followed the discussion with State Minister Roth and gathered information at many of the stands. It’s really exciting!