Germany is one of the leading donor states in providing assistance for people in the conflict zones in Syria. A report on the daily reality of the humanitarian aid workers.

Faris was born with a fluffy brown mane of hair: he was 48 centimetres long, weighing 3400 grams and healthy. It was not an easy birth. A Caesarean section was necessary. Without the team of doctors at Syria’s Bab al‑Salam field hospital directly on the border with Turkey, he and his mother Fatimeh might not have survived. 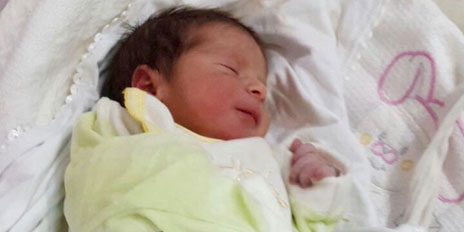 Faris is one of between 70 and 80 babies born each month in Bab al‑Salam, which means “Gate to Peace”. “In October alone, 66 emergency Caesareans were performed”, Janine Lietmeyer, Middle East Coordinator for Malteser International, explained. The aid organisation set up the field hospital and runs it in cooperation with a Syrian partner organisation – financed by humanitarian assistance funds from the Federal Foreign Office. In 2016 the clinic, which is now based in a hangar, received more than two million euros. According to Lietmeyer “without Germany’s support, this hospital would not exist. 300,000 people would not have received care.”

That means not only that operations on typical war injuries such as shrapnel wounds following a missile or bomb attack would not have been possible, but also that many people, especially children, would have died from non‑life‑threatening diseases which nonetheless require operative intervention, such as appendicitis. Premature babies would have no chance of survival. Average life expectancy in Syria has fallen by 20 years, one reason for this being the catastrophic healthcare situation. 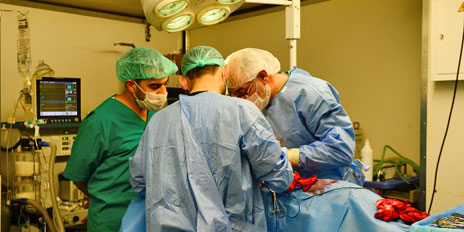 Bab al‑Salam is one of almost 70 humanitarian aid projects financed by the Federal Foreign Office for Syrian refugees in the country itself and in neighbouring states. In the past four years, Germany has provided 1.25 billion euros for humanitarian assistance and is one of the leading donor states in providing assistance for people in need in the conflict zones. A quarter of these funds goes directly to aid organisations such as the Order of Malta, three‑quarters go to multilateral partners such as the United Nations.

Airlift for 100,000 civilians cut off from the outside world

With this assistance Germany aims to help alleviate the most acute suffering in the Syria conflict. The situation for the civilian population is worst in the besieged areas. Of the 13.5 million people in need of assistance in Syria, almost six million live in areas where it is difficult or impossible for humanitarian aid to get through. The supply situation is particularly dramatic in the city of Deir ez‑Zor in north-eastern Syria. There, the fighting with “Islamic State” (IS) has left the population almost totally cut off from the outside world. The few items of food still available are extremely expensive. People are starving.

In 2016, Germany therefore provided ten million euros to support the airlift organised by the United Nations World Food Programme (WFP). For the airlift, food, medicines and other humanitarian supplies are tied firmly to wooden pallets. They are then dropped from a carrier some way out of the city like beads on a string, the white parachutes open and they float to the ground. On the ground, personnel from the Syrian Arab Red Crescent (SARC), the equivalent to the Red Cross, are waiting to receive and distribute the supplies. 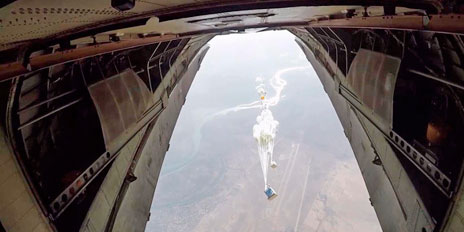 After initial problems, since April 2016 the WFP has managed to drop 2958 tons of aid supplies in the starving region over the course of the year. Around 100,000 people in Deir ez‑Zor have registered for food rations with the SARC. Thanks to the airlift they have been able to receive basic essentials. The WFP estimates that it has enabled 20,000 families to receive assistance.

More help for landmine victims in areas liberated from IS

In 2017, the Federal Foreign Office will continue to use its humanitarian assistance to support numerous projects and aid operations. The Bab al‑Salam field hospital, for example, is to receive an urgently needed vascular surgery department. At the moment, amputations often have to be performed despite the fact that the injured limbs could be saved with specialist intervention. The number of injured people has increased dramatically in recent weeks, as, in the territory liberated from IS, the terror militia has left behind a large number of booby‑traps and landmines. For civilians returning to their villages and homes, these traps pose a major threat.

According to Lietmeyer there are no longer any vascular surgeons in the whole of northern Syria. They have long fled from the war zones, but some are living in Turkey, still close to their homes. As the Bab al‑Salam field hospital is directly on the border, specialists could operate there during the day and return to Turkey in the evening. They would thus have a job suited to their skills with which they could provide for their families. At the same time, they would help many of their compatriots to avoid disability, which often leads to lifelong poverty and dependence.