Refugees acting as museum guides, and an artist who turns kitchen sponges into art on the roof of the German Federal Foreign Office: The Long Night of the Museums offered many an unusual in/sight.

Long queues in front of the German Federal Foreign Office, thundering applause in the WissenschaftsForum on Gendarmenmarkt, and a heated debate on the construction site of the future Humboldt Forum in the Berlin City Palace: The “Long Night of Ideas” that are linked to Germany’s foreign cultural and educational policy work used 17 good ideas to tempt visitors to 17 places throughout the city. “You can no longer understand the “inside” without the “outside” – which is why we need the Long Night of Ideas,” Andreas Görgen, Head of the Cultural and Communication section at the Federal Foreign Office said, alluding to the enormous commitment of, for example, German intermediary organisations, foundations, and organisations abroad, - who presented their projects during the Night. Many of the event venues, such as the roof of the Federal Foreign Office, the Humboldt Forum, and the temporary Schinkelsche Bauakademie opened their doors especially for the event. The deutschland.de team took a look around in the Night. 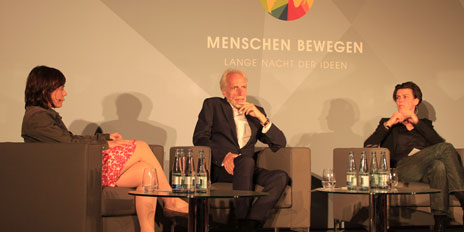 “Is culture overrated?”, Stephan-Andreas Casdorff, editor-in-chief of the “Tagesspiegel” daily newspaper asked in the discussion “The New Disorder – what Politics and Culture must achieve”. “The question is actually: Are the standard we set culture overrated?”, countered Franco-German art historian Bénédicte Savoy on the construction site of the future Humboldt Forum in the Berlin City Palace. “Culture is, after all, not something there is, but something we do together.” Martin Roth, designated President of the Institut für Auslandsbeziehungen (ifa), advocated not leaving the political world to its own devices or relinquishing all responsibility to it. “We have to ask ourselves whether we are doing enough together.” In this context Carolin Emcke, Peace Prize of the German Book Trade laureate, urged that terms such as equality, solidarity, and human dignity be translated again into stories, narratives, and images. Into a language that everyone can understand.

Beneath the sand of history – ifa gallery

Colourful, pointed wooden pegs seem to be boring through the wall in all directions. On the ceiling, barbed wire hovers above the visitors. In the opinion of artist Pascale Marthine Tayou, just like the pieces of wood penetrate the ifa gallery space, colonial elements have penetrated society, and have stayed: in the form of memories, attitudes, knowledge. His sculpture is an allusion to the town of Kolmanskop, a former German colony in Namibia. Nowadays Kolmanskop is just a ghost town buried beneath the sand of the Namib desert.

The light is dim in the Goethe Institute in Berlin. People wander past display boards with quotations from Johann Wolfgang von Goethe’s “Faust”. Beforehand, they had to specify six values that are particularly important to them. They then had to find the quotations that best fit their values: for example with love, freedom, or family. Anyone wanting to buy one of the quotations needs money to do so – and has to sell friends from their smartphone telephone list to the “Bank of Mephisto”. Who is going to enter into a pact with the devil? “Being Faust – Enter Mephisto” is an interactive game, in which visitors slip into the role of the young Faust. It’s great fun, and you discover Goethe’s work in a completely new way. The Goethe Institute in Korea came up with idea in collaboration with the games company Nolgong and the dramaturge Benjamin von Blomberg. 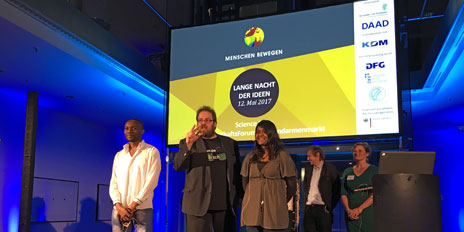 What sort of atmosphere does the planet Mercury have? Why does old water smell? The science slammers in the Wissenschaftsforum provided the answers. They have ten minutes in which to give brief insights into their research. “I’m researching algae, which is good, because they are not dying out as quickly as whales or dolphins,” says marine biologist Julia. She ultimately makes it to the final against doctoral candidate Indhu from the German Aerospace Center (DLR), who is attempting to simulate the area surrounding Mercury in the lab. The verdict is a sign of the importance of cooperation in science: they both come joint first. 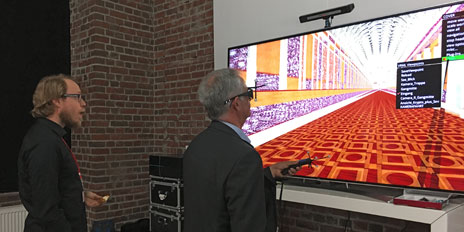 Why did those attending an audience with the emperor in Castel Gandolfo feel small and insignificant? Due to an optical illusion with patterns that became larger on the walls of the arcade in front of the emperor’s staircase. Using virtual reality technology, visitors to the temporary Schinkelsche Bauakademie can experience just what it felt like. But they are in luck: Daniel Wickeroth from the computer centre at Cologne University, who co-developed the project, offers them insights that citizens of the Roman Empire never had: They can now climb to the emperor’s staircase and from there look down on the others. “We are attempting to demonstrate the facets of archaeology today and to make it clear that we are neither fusty, nor do we use Indiana Jones techniques,” says Friederike Fless, President of the German Archaeological Institute (DAI). “We conduct research, we make diagrams, we develop 3D models, we compile registers and we share our skills and our knowledge with those who will one day need it, be it in Sudan or in Syria.” Digitisation projects such as the Syrian Heritage Archive Project are intended to preserve today what could well be destroyed tomorrow.

A touchscreen game, which ten people can play at the same time; a football computer game, in which the sportsmen have to kick a real football in order to move the ball around the pitch. Two unusual games at the Berlin Game Science Center – with an international background. At the invitation of the Goethe Institutes in Indonesia and Brazil, nominees and winners of the German Computer Games Awards travelled to one of the two countries. Together with developers in the countries they worked on games which they presented during the Long Night of Ideas.

Above the roofs of the city – the german Federal Foreign Office

High up on the roof of the Federal Foreign Office: German-Lebanese artist Said Baalbaki recently moved into the studio of the AArtist in Residence here. He is working on his project “Cookwar(e) 101”, which involves him turning kitchen utensils into military objects: Tins of espresso become protective gloves in a set of knights’ armour, washing up sponges a chain mail. “I grew up during the civil war. Out of everyday objects I’m now building things intended to act as a protective shield,” says Baalbaki. In front of the Federal Foreign Office, visitors wishing to pay Baalbaki a visit on the roof, and enjoy a view of Berlin over a drink wait in long queues. 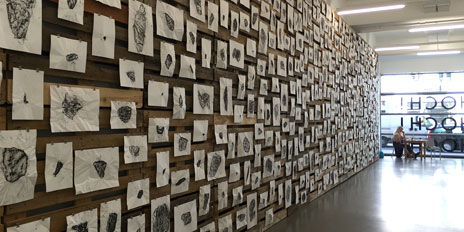 The Lebanese artist Rayyane Tabet combines memories, history, and political conflicts in his oeuvre. As a guest of the DAAD Artists-in -Berlin Program he has produced 500 frottages,i.e., carbon prints, from fragments of statues – visitors to the Long Night of Ideas can see them in the new DAAD Gallery in Kreuzberg. The pieces of stone are part of once spectacular archaeological finds from Syria, which were destroyed in 1943 in an air raid over Berlin. Tabet’ grandfather had supported the archaeologist and banker Max Freiherr von Oppenheim in the 1920s with excavation s in northern Syria. The bitter irony is that the part of Oppenheim’s finds that had been well preserved and were stored in the National Museum in Aleppo, was seriously damaged in an attack in July 2016.

“What you have given away, you have won. What you conceal you have lost.” A very nice phrase that Professor Alexander Kartosia recites. At the invitation of the  Frankfurt Book Fair the former director of the National Library in Georgia spoke in Kulturkaufhaus Dussmann about the history and beauty of the language. In 2018 Georgia is Guest of Honour at the Frankfurt Book Fair. The title of the evening at Dussmann’s was “Translation – conveying culture”. The many people sitting in front of the stage on the first floor of the Kulturkaufhaus, experience how a text that is translated several times changes: from German into French, then into Georgian, Norwegian, English and finally back into German. An extremely interesting linguistic experiment! 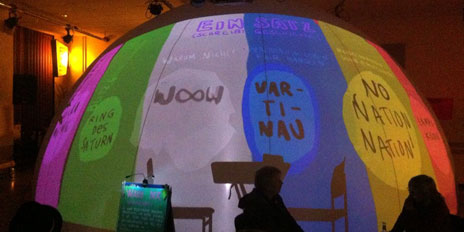 In a colourful tent in the Alte Kantine in Wedding there are people sitting who are conducting bilateral discussions for their team. The reason: This evening is games evening. With the experiment the games developer Christiane Hütter aims to demonstrate how important it is to gain experience abroad. Renata Kopřivová is a team assistant at ”kulturweit”, the international voluntary service of the German UNESCO Commission, which is organising the event. “This games teaches you to view the world from a different perspective – and that is also what kulturweit aims to do,” she explains. On this particular evening the participants agree to decide c which sentences should go down in world history.

Bulls, lions, monsters with serpents’ heads: Shining blue, enamelled tiles with these animals adorn the Ishtar Gate, one of the former gates to the inner city of Babylon, in the Vorderasiatisches Museum. People who grew up in the Middle East, the  Multaka guides, relate just what the gate and the other archaeological objects are all about. As part of the project, people who have fled from Iraq and Syria normally take Arabic-speaking refugees on tours of the Pergamon Museum. During the Long Night of Ideas they familiarise the visitors with the objets d’art in German and English and link history with current events in their home region.

Flight and art – atrium of the Reinhardtstrassenhöfe 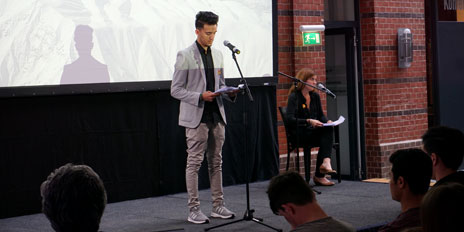 What does coming to Germany all on your own feel like? 16-year old Ghani Ataei from Afghanistan relates how it was in enthralling verse. As part of the Poetry Project, which was founded in Berlin, schoolkids that fled tell of their experience doing so in moving poems. At the event organised by the Central Agency for German Schools Abroad (ZfA)  in collaboration with the Haus der Kulturen der Welt and the Poetry Project visitors can also discover short films and sound installation produced by pupils in “welcome” and normal school classes and by European schools in Berlin. 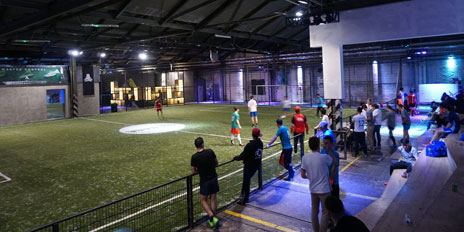 It is not only during World Cups that football brings people together. The organisers of the initiative Streetfootballworld are convinced that the sport can ensure peace in everyday life as well. In three instead of two halves, with no referee and with additional points for fair play, the participants learn to be independent and self-confident. Heang Ly is a football coach form Cambodia. He works for the SALT Academy there, one of several non-government organisations with which Streetfootballworld cooperates. “I am convinced that football can change lives. In Phnom Penh we are trying to fight corruption and clichés with our campaign. Lots of people in Cambodia think that football is nothing for girls. We discover every day, though, that girls also like playing with us.”

Only a few years ago, Berlin’s Wedding district saw a former crematorium converted into a cultural quarter. At the SAVVY Contemporary gallery, anyone interested discussed the Long night away – on the subject of “De-canonization as a Method”. The music, lectures, performances, readings, discussions and film screenings were all destined to undermine the hierarchical structures that canons produce. The band The Swag, which claims to be “the best Hip Hop band in Berlin”, then kept all the visitors to the concert hall kept on the dance-floor to the wee-wee hours.

Once South African band BCUC lets rip, there no stopping them. Hard beats, sounds to get you moving, and strong messages for a better world all blend in the music of the seven band members from Soweto. “We all have to do something for a better future,” says bandleader Jovi Nkosi. BCUC are part of a network platform called “Music in Africa”, which is sponsored by the Siemens Foundation, the Goethe Institute and the Federal Foreign Office. Visitors danced enthusiastically, the musicians played and sweated. At the end everyone gleamed happy. What a night!