Art in the attic

New perspectives for international artists in Berlin: Swede Henrik Strömberg is working in the attic studio space of the Federal Foreign Office. He is an AArtist in Residence scholarship holder.

How is it that a Swedish artist gets the go-ahead to work on the roof of the German Federal Foreign Office in Berlin? In one of those typical unrenovated Berlin spaces? There’s a nice little story behind it: When Frank-Walter Steinmeier was Federal Foreign Minister for the first time almost ten years ago he scaled the roof of the headquarters of German diplomacy on Werderscher Markt one day with the chairman of the Galleries Association of Berlin (LVBG). There is one of those fantastic city terraces up there with an incomparable view of the German capital – from the prefab blocks of Leipziger Strasse in the south and the Television Tower on Alexanderplatz to the Charité hospital in the north. Yet Steinmeier and his visitor also happened upon a large space that the construction workers, for whatever reason, had left unfinished in the 1940s. It had a glazed front but no properly laid floor or ceiling to conceal the cables, and the walls were bare brickwork, completely unplastered. The then Foreign Minister was not shocked however, but excited, because Berlin’s chief gallerist Werner Tammen murmured: “The perfect place for an artist!” 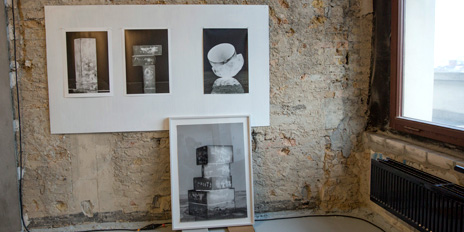 And Henrik Strömberg agrees. The Swede has been living in Berlin for ten years, after training as an artist in London and Prague. Since February 2017 he has been an “AArtist in Residence” in the context of a programme, launched in 2016 after two trial runs, of the Federal Foreign Office in cooperation with the Galleries Association of Berlin. The programme makes use of the long-empty attic space as a studio. “After all these years in Berlin, this space still offers me entirely new perspectives,” says Strömberg, who will be working on his series “Object Amnesic – The Compost” here until the end of April. The series addresses the decay and transformation of materials; Strömberg collects things that people no longer need, from sports trophies to vases, deconstructs them and reconfigures them into something new. This gives rise to sculptural objects and photographs, which are contrasted with photographic studies of nature.

A jury comprising an art critic, a curator and a gallerist select the scholarship holders, three of whom are invited to use the attic studio per year, based on purely artistic considerations. Apart from being represented by a Berlin gallery, the artists must be from abroad but live in Berlin or, if they are German, have an international reference in their work. They include Andréas Lang, AArtist in Residence in summer 2016. He found a diary in his mother’s attic along with some historical photos taken by his great-grandfather sometime before 1914 when he was a member of the so-called protection force in Cameroon. With these items in his luggage, the photographer travelled to Africa and started tracing German colonial history. The photos and video installations resulting from his trip were on view until the end of February at Deutsches Historisches Museum (German Historical Museum) in Berlin.

Artist Kerstin Honeit used the scholarship in summer 2016 to research and prepare her project “mi castillo tu castillo – mein schloss dein schloss”, a video work focussing on a country that “is barely visible anymore and almost forgotten: the German Democratic Republic (GDR)”. Ahmed Kamel, born in 1981 in Cairo and the third artist of the programme’s first year, addresses the topic of conflict in his artistic work, on both a personal and a political level. In 2017 further creative guest artists working in the attic studio will include Lebanese artist Said Baalbaki from May to July and in the autumn photographer Beatrice Minda.

Henrik Strömberg is still uncertain where exactly his current work will take him in artistic terms, the 46-year-old comments on an initial tour of the studio in March: “The space is so special that I will challenge myself to explore new worlds here.” And there is a great deal of interest in his journey: 40 guests have visited so far, and two further tours are set for 6 and 20 April. It will be clear that this is an extraordinary workplace then at the latest, as like all visitors to the Federal Foreign Office, guests must register by name in advance and be accompanied to the roof – and back down.

People are happy to accept that in view of the uniqueness of the premises. “The Federal Foreign Office is the first German, perhaps even the only ministry worldwide to do something like this,” says Anemone Vostell, Managing Director of the Galleries Association of Berlin. “It is marvellous for a public authority to open its doors like this.” The Federal Foreign Minister explained in a welcome address in 2016 why it does so and that both the art and political spheres share a mutual interest in the programme: The artists are able to develop new perspectives on topics that also concern foreign affairs. They are to “give us diplomats a different view of our work and challenge us at the same time.” That may be, but are the Foreign Office employees interested in Henrik Strömberg’s work? “I certainly do get the one or other dropping by,” says the artist.