Scientists from Rostock are helping Bhutan expand its hydropower capacities.

Bhutan is the first CO2-negative country in the world. Given the large expanses of forests, it absorbs far more carbon dioxide than it emits. Moreover, Bhutan possesses immense potential to exploit hydropower to cover all the country’s energy needs. In fact, Bhutan has even more ambitious goals. By the year 2020 the kingdom in the Himalayas wants to install an additional 10 GW in hydropower capacity in order to be able to export even more energy, above all to India. At present, several large projects are under construction. The problem is that the existing power stations are not operating stably. If Bhutan’s grid were to be uncoupled from the stable Indian national grid the small kingdom would not be able to cover its power requirement. 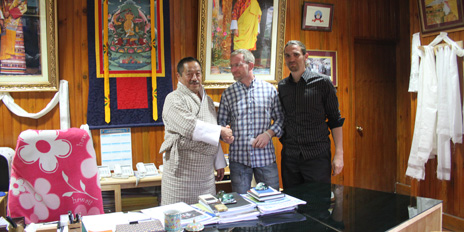 Germany is supporting the expansion of hydropower capacities by making a loan through Deutsche Investitions- und Entwicklungsgesellschaft, a subsidiary of the KfW Development Bank. The financing is destined for the construction of a maintenance centre for the power stations’ plant and machinery. And DAAD, the German Academic Exchange Service, is financing an exchange programme to train experts. The Institut für Elektrische Energietechnik at the University of Rostock is anchoring the German end.

“The main pillar of Bhutan’s economy is the sale of energy produced by hydropower stations,” explains Axel Holst, a member of staff at the University of Rostock who has since 2013 been supporting the exchange programme with Bhutan, which comes under the aegis of Professor Harald Weber. Hydropower is thus the key to the Bhutanese economy, whereby a large part of the power generated is sold to India. The proceeds of the state hydropower company amount to 40 percent of total government revenues. 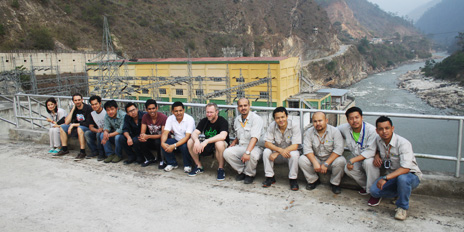 “The Indians have already built some hydropower stations, but the control and adjustment issues that crop up have yet to be solved,” continues Holst, who studied engineering. The German academics have conducted measurements at various power stations in order to be able to run experiments using a computer model. “As a rule, you can’t do that during ongoing power station operations”, the 46-year-old explains. The electronic models are intended to enable optimizations that will in turn enable the stable island operation of the power plants.

“Our technical assistance is only one factor, the other is of course training,” Holst says. In Bhutan there is only one academic Bachelor-track course. Young academics have to go abroad to undertake any more advanced studies. At present a Master’s course is being set up. To support this effort, each semester 4-6 students and academics from Bhutan arrive in Rostock, where they complete special training in electrical energy technology at the university. The project has been financed through the summer of 2017, and a concluding workshop will then evaluate to what extent the tasks set have been completed.

Regenerative sources of energy provide us with a virtually inexhaustible supply. These portals explain how energy can be won from water, wind, the sun and other renewable sources.
Read more