Karamba Diaby on his path in Germany and how integration can be successful.

Back in the 1980s, a scholarship in his pocket, he arrived in East Germany from Senegal and got a Ph.D. on German allotment gardens. Today, Karamba Diaby is the first black person to be a member of the German Parliament for the German Social Democrats, the SPD. He told us all about his path in Germany and how he believes integration can succeed.

“I was once asked in an interview whether I had to arrive twice in Germany. It was a justified question and I answered ‘Yes’. Because when I arrived as a student from Senegal in East Berlin in 1985, Germany was still divided. Part of my Chemistry study programme was taught from Halle (Saale) – meaning what was then East Germany. Since all foreign students lived in halls of residence, we had little contact with the locals. Later, before and after the Wall came down, gradually the country that had invited me to be there as a student disappeared. While the people were out on the streets yelling “We are the people”, I was asking myself whether I belonged to this “people”. Not to forget that I did not know whether I would be allowed to go on studying. At the end of the day, the German Academic Exchange Service (DAAD) shouldered the costs of my scholarship so I was able to finish my studies in the Federal Republic of Germany, gained a Ph.D. in Geo-Ecology and was able to arrive a second time.

Fortunately, in 1985 I was immediately able to complete a nine-month language course in Leipzig before proceeding to the Martin Luther University Halle-Wittenberg. The language course was key for me. Firstly, it enabled me to follow the curriculum. Secondly it allowed me to converse with local people and forge friendships.

It’s important to be interested in the country, the people and the culture – if you want to arrive. If you don’t ask questions and don’t approach people, you will take part less in society and thus be less a part of things. On the other hand, the inhabitants of the place where you arrive need to be interested too. There has to be mutual, benevolent interest. When I was busy writing my Ph.D. on the heavy metal pollution in allotment gardens in Halle and spent lots of time there, people asked me whether I had a family, whether the family was here with me, and what I wanted to do next. They were interested in me just as I was in them. So we got talking, debating, and friendships came into being.

I was involved in various civic projects during my school and university studies in Senegal and also later in East Germany and the Federal Republic after Reunification. Among other things, I was chair of the International Student Committee and until Reunification I represented the interests of all foreign students at my university in Halle. Following Reunification I got involved in various charitable organizations in the areas of education, youth policy, diversity and human rights. I believe that being committed to others facilitates integration. Shared commitment enables you to get to know a country and its people better, to establish contacts and to learn the language more quickly. These are all factors that make arriving much easier.” 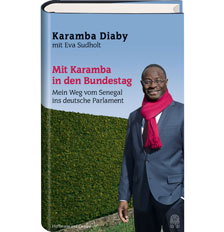 “Mit Karamba in den Bundestag” (My path to the Bundestag)

Karamba Diaby has spoken about his fascinating life story in numerous interviews. You can read about it in his book “Mit Karamba in den Bundestag”, published by Verlag Hoffmann und Campe in October 2016. Diaby talks about his native country, Senegal, about life in East Germany and in reunified Germany. And not least about his vision of an open and sustainable society. Karamba Diaby turns to humour to shake a number of prejudices.