The Energising Development programme is enabling millions of people in Africa to obtain access to electricity. This is creating new jobs and opening up new prospects for many.

When it got dark in the evenings and pregnant women came to Salamawit Betru at the Sire Goyu Health Centre, the nurse and her colleagues had to improvise. “We lit the room with candles and kerosene lamps. We even used our mobile phones as torches,” she recalls. That was during the time without electricity. Today the health centre in Ethiopia has an electricity supply. Electric bulbs light up the treatment room. Thanks to electricity Salamawit can cool vaccines, sterilise instruments and test patients for malaria.

The Sire Goyu Health Centre is one of 111 health centres in Ethiopia that gained access to electricity before 2015 through the Energising Development (EnDev) programme. EnDev is an international initiative that supports sustainable access to modern energy services in developing countries. It therefore contributes to the introduction of efficient and climate-friendly energy technologies to households, social institutions and businesses. As a result, progress is also made in the development of renewable energies in rural regions. EnDev is active in 25 countries, including 15 in sub-Saharan Africa.

Electricity for at least 20 million people 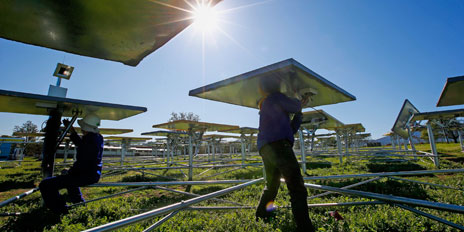 Thanks to EnDev, 6.2 million people and just over 8,000 schools and health centres in sub-Saharan Africa have received sustainable access to electricity and cooking and heating energy. At least 20 million people worldwide are to receive access to affordable modern climate-friendly energy by 2019. Germany and the Netherlands set up the programme in 2005. Norway, Australia, the United Kingdom, Switzerland, Sweden, Ireland and the EU later joined as additional partners.

The partners use the programme to combat energy poverty in individual countries. According to the International Energy Agency, over 600 million people in sub-Saharan Africa still have to make do without electricity. Among other things, this has serious consequences for the environment. “Without an electricity supply, people use waste materials or wood they fell in the forest for heating and cooking,” says Michael Köberlein, a consultant with the Deutsche Gesellschaft für Internationale Zusammenarbeit (GIZ), the German development agency that is largely responsible for coordinating the programme on behalf of the Federal Ministry for Economic Cooperation and Development (BMZ). Energy poverty therefore contributes to deforestation and is responsible for many other ecological problems in these countries. .

Positive impact on education and health 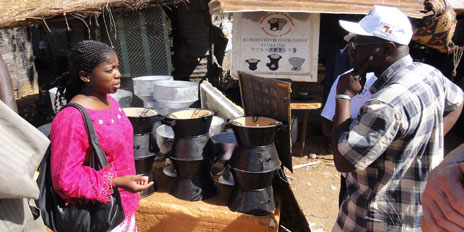 Energy poverty also has an impact on health. This is because many people breathe in large amounts of smoke-filled air from simple hearths or stoves. According to the World Health Organization, over four million people die early every year as a result of this. Energy poverty has a significant influence on education too. “Without electricity, schools cannot light their classrooms or use computers. Children cannot study in the evening because they don’t have any light,” says Michael Köberlein.

The EnDev programme is active in several areas to combat energy poverty. For example, the programme supports government institutions and businesses in setting up and developing the electricity grid. Furthermore, the partners support the development of private-sector markets, for example, for solar lamps and modern stoves. This promotes more efficient technologies, which wherever possible are then manufactured in the respective countries. This approach supports the local economy and creates jobs and income. People like Shadrac Ananda in Kenya then benefit from this. “At an EnDev workshop I learned how you manufacture and install modern stoves,” he explains. “Since then I earn good money.” As a result, he has been able to build a house and buy a cow.

The positive effects of EnDev are also shown in surveys. In one study in Kenya, over half the stove vendors surveyed stated that their incomes had increased by over 55%. Many have gained an additional source of income as a result of the job, and their financial situation has stabilised. And almost all of them have employed other workers.

Access to electricity also creates new jobs in other ways. In Mozambique EnDev is supporting grid expansion for people with low incomes. Many households subsequently bought a refrigerator. Some have used it to earn money. For example, they sell cold drinks or chicken. Agnes Segla from Toucountouna in northwestern Benin also opened her own food store when her village was connected to the electricity supply. Today she sells fish and sausages and supplies restaurants with her products.

Furthermore, new more efficient products also enable people to save money. Using a modern stove can give a household in Uganda an additional four euros a month. The climate also benefits significantly from the programme. After all, the supported new forms of electricity generation, such as solar cells, small hydroelectric power stations and biogas plants, reduce greenhouse gas emissions. “Measures within the EnDev framework reduce carbon-dioxide emissions by over 1.8 million tones per year,” says energy expert Köberlein. Therefore everyone benefits.

Internationally, Germany leads the way in climate protection and is a pioneer in the development of renewable energies. The exit from nuclear power is already under way.
Read more

Regenerative sources of energy provide us with a virtually inexhaustible supply. These portals explain how energy can be won from water, wind, the sun and other renewable sources.
Read more