14th documenta: What you need to know

Antidote to small-mindedness: every time the international art world declares Kassel as its capital, visitors can look forward to experiments and extremes.

What is the documenta anyway?

In a sentence, the documenta is internationally the largest and most important exhibition of contemporary art. Superlatives are simply part of things in Kassel. But only once every five years, because that is how often the documenta is staged. It is also called the 'Museum of 100 Days', because that is how long it lasts. The first was held in 1955, when the Federal Republic of Germany was still greatly marked by the Second World War, and the country's isolation from the international art market was palpable.

Arnold Bode, artist, curator and teacher, was the source of the idea. The Nazis had defamed many modern works of art as 'degenerate'. The documenta was conceived as an 'antidote' to this small-mindedness. From the outset it stood for the openness and freedom of art, for experimentation, the avant-garde. And this is why controversial works can often be seen here. This can sometimes be stressful and disturbing, but it's always exciting.

What is special about the documenta

The documenta is where you can find out which way international art is going. Each time, a different internationally renowned curator is responsible for choosing the artists – and asks them to state their position on societal issues. The result? Art as a mirror of its time, topical and stirring. The works can be seen in many places: in churches, theatres and of course in the Museum Fridericianum and the documenta Hall. The documenta city plan lists a total of 42 locations. Almost a million visitors went to the last documenta. Kassel, with its 200,000 inhabitants, then becomes an international art metropolis.

The documenta 14 in Kassel has started on 10 June – and had previously opened its 'second home' in Athens. This was the first time the German art exhibition was also  held abroad – works, performances and installations by 160 artists had been on display until 16 July at more than 40 locations in the Greek capital. The motto is: 'Learning from Athens'.

The person behind the documenta 14 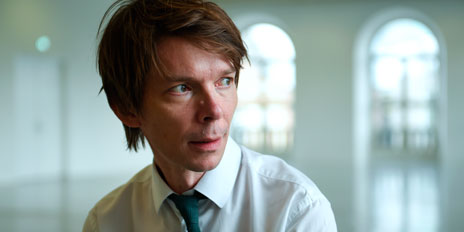 Artistic director is the Polish curator Adam Szymczyk (47). Among other things, he was previously Director of the Kunsthalle Basel. His team includes more than 200 members of staff in Athens and Kassel.

The most spectacular works in Kassel

Athens and Kassel will be linked by the longest performance: for his documenta contribution 'The transit of Hermes', the Scottish concept artist Ross Birrell is having four horse riders cover 3,000 kilometres across Europe from the Acropolis to northern Hesse.The 160 artists who exhibited in Athens are also active in Kassel. Some of the highlights of the exhibition are also visible in public spaces. The 'Parthenon of Books' by the Argentine artist Marta Minujín, for example. She is covering a replica of the Acropolis with prohibited books from all over the world. Berlin-based artist Hiwa K. has built an installation at Friedrichsplatz square made of construction pipes – he had  fled from Iraq in similar pipes on a truck. And Kassel's Guardhouse (Torwache) is covered with old jute sacks – a project by Ibrahim Mahama from Ghana.

The list of artists ranges from A for Abounaddara, a Syrian artists' collective, to Z for Artur Żmijewski from Poland. Many participants share the experience of migration and political oppression. But you will look in vain for the big stars of the art world. The aim is to discover new talent.

Documenta 14 to 17 September 2017
For more about the history of the documenta in German, see
www.kassel.de/kultur/documenta/geschichte/