Seeds and food for flood victims

Mozambique is suffering from the impact of awful natural disasters. The Federal Republic of Germany is helping the neediest.

It’s early morning, but there’s already a lot of commotion on the village square in Mussassa. About 500 flood victims have gathered in the shade of the large Marula tree, most of them women. Today is a special day for them: The widows, single mothers and other especially needy persons will receive vouchers with which they can buy seeds and agricultural tools. The German Federal Foreign Office is providing the funding for the extraordinary market, which is organized by the German NGO Welthungerhilfe and its local partner AJOAGO (Asociação dos Jovenes e Amigos de Goruro). 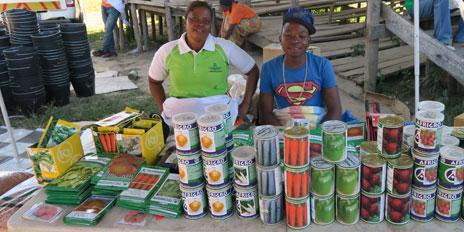 Fatima Mubango is one of those waiting in line. The 45-year-old widow lost everything she owned in February 2017 when Cyclone Dineo made landfall and left the entire Mambone district in the north of Inhambane Province on the banks of the Save River flooded. “I lost everything,” said the mother of five, whose husband died of AIDS a few years back. Her hut was washed away, the corn field devastated, the chickens gone. Now she feels hope at long last. Fatima Mubango has on three occasions already received vouchers for basic foodstuffs to enable her to feed her family. With her main harvest of corn and beans completely wiped out, she now has vouchers enabling her to buy vegetable seeds worth 45 Euros for the off-season. Together with other participants in the project, she learned on the community’s fields how to grow vegetables sustainably. “Before that we hardly planted vegetables and if we did, we simply scattered the seeds any old how,” the lean smallholder explains. Now she knows how to correctly till her vegetable patches and protect the soil from drying out. Like more than two million other Mozambicans, she is suffering not just from the aftermath of the flooding, but also from the terrible drought caused by the El Niño climatic phenomenon.

Selected vendors have set up their stands outdoors to create the seed market. On offer are different seeds for onions, tomatoes, cabbage, lettuce, cucumbers, capsicums, and other vegetables, as are hoes, sickles, watering cans and gumboots. The prices were negotiated in advance by Welthungerhilfe in consultation with the local administration to make sure there is no profiteering and the hard-hit buyers only have to pay reasonable prices despite being a long way away from the country’s centres of commerce.

Each beneficiary is given a booklet with vouchers for a total of 3,000 Meticais, currently the equivalent of about 45 Euros. The project organizers call out the individual names from the long lists they have. The beneficiaries confirm by fingerprint or signature that they have received the booklet and can then proceed to the vendors’ stalls. There volunteers help them do their sums, negotiate, and carry the purchases. The project organizers likewise arrange transport to remote parts of the district or for the infirm or disabled.

“The advantage of the voucher system is that the people can choose for themselves what they need,” comments former Welthungerhilfe Mozambique Country Officer, Caroline Peyre. “That gives them back a bit of their dignity and they no longer feel as if they were supplicants or simply being given assistance. And it supports local businesses, from which the whole region then benefits.” This is especially true of the seeds: While the food vouchers helped assuage the initial distress, seeds constitute an investment in the future.

“The humanitarian assistance provided by the Federal Foreign Office through the Welthungerhilfe organization was disbursed just in time to prevent a real human tragedy,” says Dr. Detlev Wolter, German Ambassador to the Republic of Mozambique during his visit to Mussassa. “This emergency relief supports many of those affected by helping ensure they can meet their basic needs for food both during the drought and in the wake of the subsequent floods. Mozambique has very fertile land, but the ability to cope with natural disasters must be strengthened further. Which is why, alongside disaster response, one of the key focusses of German humanitarian and development-policy commitment in Mozambique remains crisis preparedness, early warning systems and adaptation to the impacts of climate change.”

These portals provide interesting information on political concepts and you’ll find out how citizens and entrepreneurs can learn to act more responsibly.
Read more

You can find out about ingredients, food additives, recipes or tips on how to store different types of food.
Read more