Under the motto “Love out Loud” the re:publica digital convention is promoting basic rights on the web and speaking out against fake news and hateful comments and posts. Here are some impressions from the first day.

It is certainly a colourful and diverse world awaiting those attending re:publica in Berlin, Germany's biggest digital convention.  Colourful, not only because the “Love out Loud” motto  evokes a world in rainbow technicolour but because of the diverse nature of the features which the future of digitalisation has in store for us.  The discussion ranges from 3D printers and the maker movement to virtual realities, which guests can explore with VR glasses, from artificial intelligence and working side-by-side with robots to data protection and self-driving cars.  Things start to get heated as soon as one of this year's main topics comes up for debate.  During more than 500 sessions across three days a large number of the 1,180 speakers from 65 countries will be considering issues such as fake news, freedom of speech and the press, fundamental rights online and transparency in the use of algorithms.  “Freedom of the press is a utopia which we have to fight for,” says journalist Can Dündar, who up until recently was the editor-in-chief of the Turkish newspaper “Cumhuriyet”.

Impressions from the opening day:

“We're a long way off being grown up,” highlights re:publica co-founder Tanja Haeusler at the start of her speech opening the eleventh re:publica and says that the digital convention has managed to stay young even after all these years.  A recurring theme stressed by the organisers is that taking on responsibility should not be a question of age.  They want their motto “Love out Loud” to be seen as a call to digital civil courage.  “For us it's about not abandoning people who are faced with brutality online,” says re:publica co-founder Johnny Haeusler.  Berlin's mayor Michael Müller cannot imagine a better place than Berlin, Germany's digital capital, to host re:publica.  According to Müller there is no other city like Berlin which stands fundamentally for freedom, for openness and tolerance, for freedom and internationality.  However, freedom of expression and the press are not guaranteed but values which “we have to constantly fight for and be committed to.”

“A frog in hot water”

The problems which come with living and working in countries which limit press freedom are all too familiar to many international journalists.  Can Dündar from Turkey, Martón Gergely from Hungary, Ramy Raoof from Egypt and Katarzyna Szymielewicz from Poland paint a powerful picture of their daily fight for freedom of speech and the press.  “Hungarian journalists were like the frog in a pot of water which is slowly being brought to the boil,” says Márton Gergely, deputy editor of the Hungarian opposition newspaper Népszabadság, which has suspended publication.  Web activist and security researcher Ramy Raoof has been pushing for more transparency.  He asks the audience to send requests to governments and publish every piece of data online in order to help proponents of civil society who are currently being threatened in Egypt.

More than just a game

Be it chess or politics, you always need the right strategy.  Just how quickly politically motivated strategies on the internet can pose a real threat to democracy is outlined by the former Russian world chess champion Garry Kasparov.  The Putin critic warns against manipulation by undemocratic governments via the internet and the abandonment of democratic freedoms in the West.

Trying to be nice 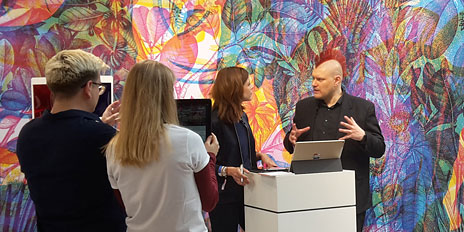 He is considered to be someone who enjoys rubbing the German people up the wrong way.  The blogger and author Sascha Lobo is famous for insulting his audience.  Those who are expecting more of the same on the first day of the re:publica, are left sorely disappointed.  He manages not to utter a single bad word about his audience.  Sascha Lobo himself points out that he has changed his mind – or as Garry Kasparov might put it – his strategy.  This also makes up part of his talk.  “Exclusion doesn't work” he says, referring to views spread on social media inciting hate, such as the comments regarding refugees.  According to the blogger, as well as taking a stand against these comments and drawing “red lines”, it is just as important to try to reason with the authors of these hateful comments.  “Debates have a powerful effect,” says Lobo.  Differing views are important as long as they are compatible with the basic law he continues.  He rounds off his talk with some comparatively softer words, “go out and discuss”.

“Love out loud – what does it actually mean?”, asks writer and winner of the Peace Prize of the German Book Trade, Carolin Emcke in her talk.  She sees the motto of re:publica 2017 as a “stand against hate, against an extremism, which is present among the bourgeois centre and has lost its shame.”  She shows how hate is spread in society and (social) media using the example of facebook posts and rumours being circulated about refugees.  Emcke advocates a lively culture of debate, genuine arguments instead of slogans and above all else, humanity.  There is one thing the re:publica organisers would definitely advocate: a whole lot of love.

The re:publica brings people from all over the world together and invites them to exchange their thoughts and ideas.  With the “re:connecting EUROPE” initiative the founders of re:publica are looking to build a Europe-wide network for the creative industry.  In 2016 the digital convention also took place in Dublin and in 2017 they are once again travelling to Ireland as well as making their debut in Thessaloniki, Greece.  Before that, however, 17 actors from Dublin's and Thessaloniki's creative industry are attending the re:publica in Berlin with the help of funding from the Federal Foreign Office.  The main goal is to discuss the common challenges faced by activists, founders and artists in Europe and the potential solutions.

Those attending the re:publica this year are also being offered the opportunity to dive into an unknown world.  In cooperation with Federal Ministry of Education and Research's Year of Science 2016/2017 the digital convention are initiating the “sub:marine” track, which will focus on new technologies being employed in our seas and oceans and the sustainable use of natural resources.  One particular highlight is the chance for visitors to virtually venture into a coral reef using VR glasses.  Reaching out and touching the coral is allowed here but you will do well to do so.  For those looking for something more tangible, head over to the Fab Lab Berlin stand.  With impressive precision their 3D printers are churning out small sculptures and cool t-shirts.

“Show civic courage in the Internet, too”: Interview with re:publica speaker Kübra Gümüşay

Security on the Internet

The freedom of opinion and information has limits when children and young people are exposed to dangerous media contents.
Read more