Skip to main content
Key topics:
Discovered for you

Discover German history by bike: the Berlin Wall trail links the present and the past.

Travelling by bike allows you to get close to the remains of the Berlin Wall. AdobeStock

It’s quiet in Zimmerstrasse in Berlin’s Mitte district. And that’s not a bad thing. An information pillar describes how an attempt to escape from East to West Germany ended in tragedy: on 17 August 1962, 18-year-old Peter Fechter was shot by GDR border guards here and bled to death in the strip of no man’s land. There’s not much time to let this sink in, however, as just a few turns of the pedal further on it’s like Piccadilly Circus. Tourists from all over the world are cheerfully queuing up to take selfies in front of the reconstructed guard house at the former Checkpoint Charlie border crossing.

These two contrasts are a good reflection of the history of the Berlin Wall. For 28 years, the Wall separated the German population in the east and the west, entrenched the political division of Germany and Europe, tore families apart and divided Berlin. The Berlin Wall cycle trail is intended to commemorate this. In 14 sections covering a total length of 160 kilometres, it takes us on a tour of all the key points of the former divided Germany – right through the heart of Berlin, past other former border crossings and Bernauer Strasse, which is the central memorial site commemorating those who died at the Berlin Wall. The trail then continues to the south of the capital, via Schönefeld and Lichterfelde to Wannsee Lake in the southwest and to Hermsdorf in the north.

One really compulsory section is without doubt the part that leads from Warschauer Strasse station on U-Bahn line U1 towards Potsdamer Platz. It starts with a relaxed coast down from the bridge to the banks of the River Spree, and then the emotional rollercoaster ride begins. The route leads us along East Side Gallery, which is not only impressive testimony to the border situation and the longest preserved section of the Wall, but also a canvas for artists and a tourist attraction. Lovers pose in front of the pictures and graffiti, while souvenirs are on sale behind.

After we have crossed Schilling Bridge, which is the only uphill part of the route, we find ourselves in the Luisenstadt area. In line with plans drawn up by the famous landscape gardener Erwin Barth, a park-like stretch of greenery was established along the former border as far as the Engelbecken (Angel’s Pool). Looking at the idyllic setting today and the people strolling around, sitting on benches or relaxing over a game of boccia, it can be unsettling to imagine the dramatic and fatal attempts that were made to escape East Berlin here.

Time for a break? This is a good place for one, as there is a cafe right next to the water at the Engelbecken. Now let’s carry on past the building that is home to the Axel Springer publishing house, following the markings that chart the course of the Wall – in the city centre it is traced by a double row of cobblestones – through Zimmerstrasse to the memorial site for Peter Fechter. We pass Checkpoint Charlie, which was the border crossing for foreigners, and the Wall Museum (we recommend allowing two extra hours to visit this museum), and then find ourselves at the “Topography of Terror”. It is here that the headquarters of Nazi terror were situated from 1933 until 1945. Directly next door, the Wall was later constructed; a 200-metre long section of the outer wall still stands here today, conveying the full force of the former border to observers. Towards the end of the seven kilometre-long section, you may need to hunt a little to find the old GDR watchtower that is hidden between new buildings at Potsdamer Platz.

Travelling quickly from place to place, but slowly enough not to miss out on anything. 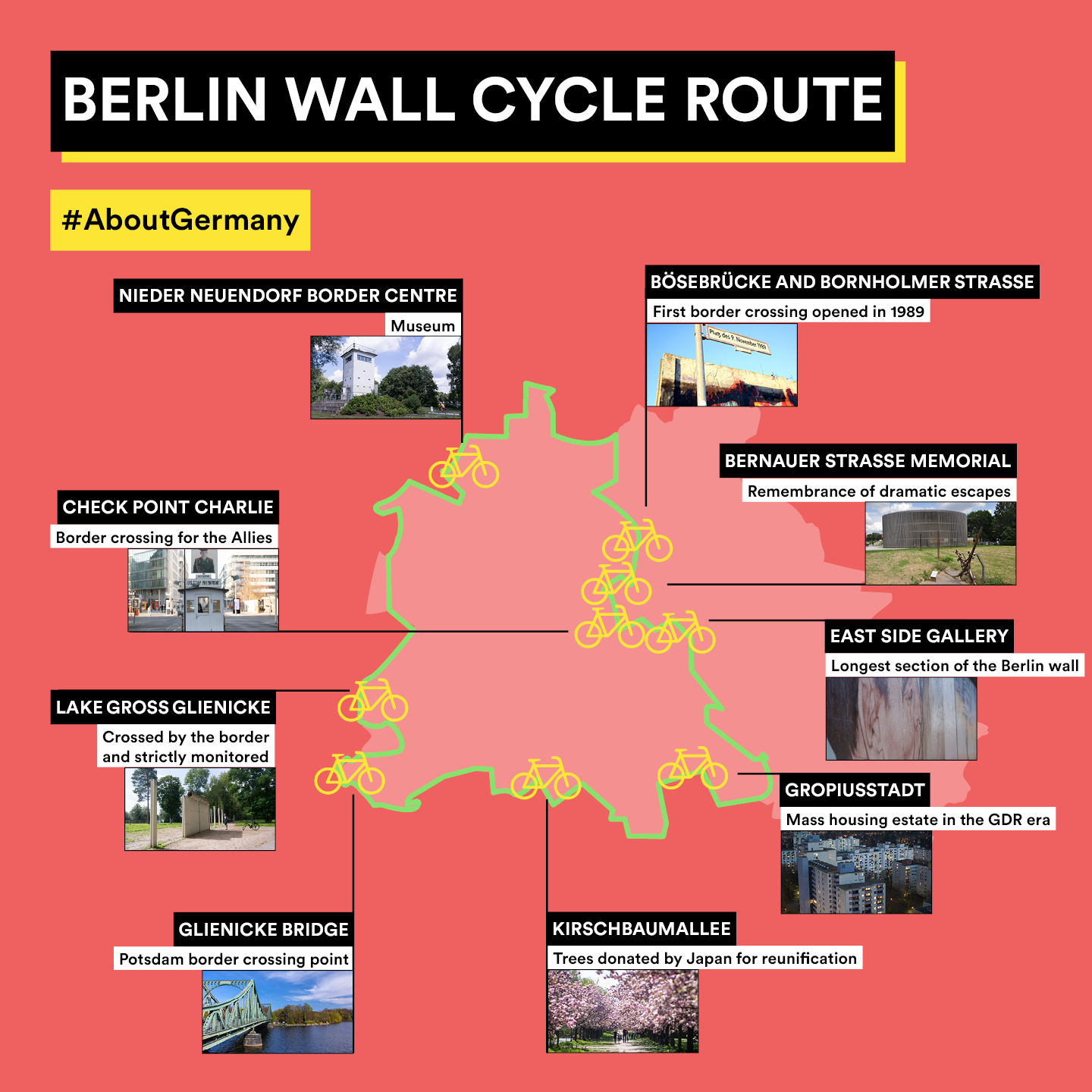 The chance to explore the history of Germany’s division by bike was just a distant dream following the fall of the Berlin Wall in 1989. The prevailing political and media opinion was that nothing should remind people of the Wall, and that grass should be allowed to grow over the site. Policymakers wanted to revive 50-year-old plans of a “car-friendly city” and extend the A100 motorway – at the precise site where the Bernauer Strasse Memorial Site stands today. “It’s as if they wanted simply to erase the past”, says Berlin’s Green politician Michael Cramer. “Fortunately, Chancellor Helmut Kohl managed to stop this from happening.”

It was Cramer who in 2001, to mark the 40th anniversary of the Wall’s erection, submitted a motion to build a cycle path along the former border. This was then adopted by Berlin’s House of Representatives. “Then signposting of the route and bike-friendly expansion of the path got underway,” he recalls. He says that the project’s primary intention was to remind people about history. “However, the trail quickly evolved to become a tourist highlight.”

To build the Berlin Wall cycle trail through the city and all the way around the former West Berlin, the planners used the Allies’ customs route on one side of the former border and the patrol road used by GDR border guards on the other. 15 kilometres of the trail needed to be reconstructed or repaired. The starting and ending points of the five trail sections, which are up to 20 kilometres long, are always located close to local public transport stations and are therefore easy to reach. Maps and signposts help with orientation. At each of the stations along the Berlin Wall History Mile, as well as at the information pillars, information about the division of Germany can be found in several languages. A “Berlin Wall Orientation System” in the city centre offers maps and audio stations to help people discover remains of the Wall. Particular events are explained with the aid of photographs and texts.

Incidentally, it is also thanks to Michael Cramer’s persistence that the very last gap in the Berlin Wall cycle trail is now in the process of being closed with a new underpass. Until its completion in 2024, a detour of two kilometres is necessary at this point. Why is it that Cramer can’t get the Berlin Wall cycle trail out of his head? Cramer: “I believe teaching people about history by bike is ideal. One travels quickly from place to place but is moving slowly enough not to miss out on anything.”

Travelling in harmony with nature

Whether you are fans of cities, nature lovers or hungry for knowledge: here are three examples of how you can enjoy sustainable travel through Germany.
Read more

Cycling tours for 5 Euros a day

Kit Crane cycled from London to New Zealand in 19 months. “warmshowers” helped him on his low-budget ride through Germany.
Read more