The fabric prospects are made of

How start-ups are enabling refugees to enter the labour market. A visit to a fashion dressmaker’s in Frankfurt am Main.

Esraa is standing at a high work table folding a piece of fabric. From the shelf beside her, she takes one of the large plastic boxes and puts the fabric in it. Each box has a brightly coloured label with the name of one of the fashion companies for which Esraa and her colleagues make garments. The 21-year-old works expertly, as if she had never done anything else. But her journey to the small workshop in Frankfurt’s Nordend district was a long one. Esraa comes from Syria: she studied fashion design in Damascus. In 2015, she fled to Germany from the civil war back home. 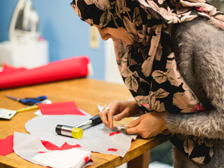 A few months ago, she joined the small team of Stitch by Stitch. Nicole von Alvensleben and Claudia Frick opened the dressmaker’s in late 2015. Designer Frick knew there was a demand for workshops producing small quantities of high-quality clothing. Von Alvensleben brought to the venture her businesswoman’s knowledge of social entrepreneurship. And there was another concern on both of their minds: integrating refugees into the labour market.

Withe support of the KfW Stiftung and Social Impact, an agency for social innovation, their idea was transformed into a company. The two women received a so-called Ankommer stipend, which is aimed at start-ups and initiatives that help improve refugees’ access to the labour market. “Refugees can only be successfully integrated if their economic integration is successful as well,” says Bernd Siegfried, Managing Director of the KfW Stiftung.

Nearly 30 initiatives, most of them from the food service and craft industries, have already benefited from the Ankommer stipends. For up to eight months, they can use the premises of one of the Social Impact Labs located in various German cities, are given advice on financial and legal questions and are integrated into the network of business incubators. It’s been a success, says Norbert Kunz, Managing Director of Social Impact. “All 14 of the teams supported in the programme’s first round have actually started businesses and have so far created nearly 50 jobs and trainee positions.”

Training as a bespoke dressmaker

Besides Esraa, there are four other women from Syria and Afghanistan working at the dressmaker’s in Frankfurt. The asylum applications of most of them have not yet been decided. Their two bosses are doing all they can to offer them prospects for the future all the same. Esraa is now training as a bespoke dressmaker, and one of the other workers is catching up on the theoretical part of the training at a vocational school and should obtain her apprenticeship diploma in two years’ time.

The women’s practical know-how is excellent as it is, says Nicole von Alvensleben. “Some of the skills they’ve brought with them from their home countries, especially in embroidery, are ones you no longer find here.” That’s something the workshop’s customers appreciate. Stitch by Stitch mainly produces small lines of garments, but they are now also receiving orders from major fashion companies that attach importance to sustainable production and fair working conditions.

The ‘care factor’ is crucial

For the company’s founders, the first year has been a great success – but one involving a great deal of work and personal commitment. “We occasionally accompany our workers to appointments at government offices or help them if they don’t understand an official letter,” explains von Alvensleben. Her experience shows why big companies tend to have problems integrating refugees. “Fine-tuning is difficult for large firms with their established structures,” says Bernd Siegfried of the KfW Stiftung. “That’s why integration works best with small and medium-sized companies that are also able to offer the ‘care factor’.”

The founders’ commitment is to be rewarded: in 2017 the KfW Stiftung and Social Impact are for the first time offering the Special Impact Award, worth 45,000 euros. The award will honour particularly innovative Ankommer stipend holders and other successful social entrepreneurs.

The citizens’ portals show how and where citizens can commit themselves as volunteers. If you’d like to have a say too, you’ll find information and contact addresses here.
Read more