On 11 November, in Berlin, prizes were awarded for the first time for the best PASCH alumni projects of the year. The Central Agency for Schools Abroad (ZfA) and the Goethe-Institut selected the most creative ideas according to the criteria of innovation, public benefit, feasibility and sustainability.

PASCH stands for “Schools: Partners for the Future” and is an initiative founded by the Federal Foreign Office in 2008. Today it networks 1,800 schools around the world in which learning German plays a special role. “PASCH alumni are cultural ambassadors – many of them later assume key positions in their home countries and as a result contribute to good relations between their country and Germany,” says Stephan Steinlein, State Secretary of the Federal Foreign Office. “I am pleased that we have been able for the first time to bring to Berlin PASCH alumni who are studying at different places in Germany. Additionally, I’m pleased about the first competition among PASCH alumni. Some of the winners are working together across regions; they have taken up topical political issues, such as migration prevention, or want to promote the German language more strongly in their country.”

A total of 51 PASCH alumni groups from 27 countries took part in the competition. The best six projects will receive 2,000 euros each in prize money to realise their ideas. Three winning teams were invited to Berlin for the award ceremony during the first PASCH alumni meeting with 120 graduates from PASCH schools in 43 countries. Interviews with prize winners: 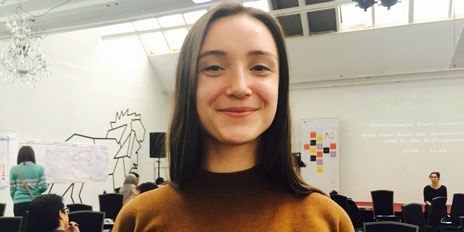 Which project idea did your team win with?

We want to found a platform that will enable PASCH alumni to offer free private overnight accommodation. Then we PASCH alumni will be able to travel around the world and find a bed and a local person everywhere with whom we can communicate in German. It will network us very, very well – above all, because all young people enjoy travelling.

You also went to a PASCH school and learned German there. What was that like for you?
It was pretty cool. German was basically the only subject I really enjoyed. After school I then also came to Germany, completed preparatory college and am now studying theatre studies in Munich.

Why are you here? What do you like about Germany?
I like very many things here. Above all, everything is more relaxed here than at home in Belarus. You can express your opinion here. If, for example, I write a play at university, I can criticise everything. Back at home people don’t do anything like that. There isn’t as much freedom for free thought and creativity. 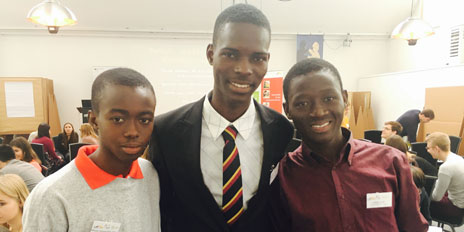 You were among the winners of the PASCH alumni competition with your project idea. What was the idea you submitted?

We want to organise debates and conferences on the subject of migration. That’s a big issue for us in Africa. We want to inform people and show that illegal immigration to Europe also involves great difficulties. Many people here in Africa still have misconceptions. And we want to tell Africans that they have to become active themselves and can change their country so that they feel comfortable there.

You are studying in Togo and are in Berlin for the first international PASCH alumni meeting. What do you like about Germany?
The Germans have very many ideas, and they also work very hard. There are many opportunities here to create and achieve something. Furthermore, everything here is very clean and very structured – I really like that.

Was it difficult for you to learn German?

Young people from all over the world are talking German at the alumni meeting. What will you take home with you?

It’s really great that we can communicate with everybody here. We from Togo were the first to arrive, and we were very excited. Now we have friends from Georgia, Russia and Burkino Faso.  Belonging to the PASCH alumni is now something like a new family for us.” 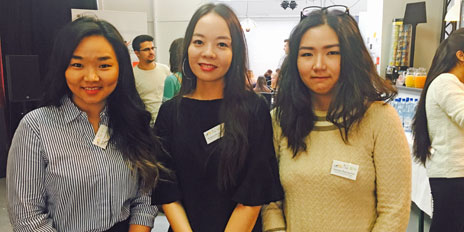 What was it like for you to go to a PASCH school?

I spent my childhood in Germany. When I returned to Mongolia, I definitely wanted to remain in contact with the language and culture. It was perfect for me.

Which German word do you find most beautiful?

I believe that’s the word “Aufarbeitung” or reappraisal. A language always says something about the society of the respective country. From that you can see that the Germans also reappraise or reconsider. That is not necessarily the case in Mongolia.

Are you benefiting from the German language today?

I believe it’s a great advantage if you know German, especially in Asia. That is because there are not so many people who know German. On one hand, it’s very advantageous for your career; on the other, you automatically belong to a network that would otherwise remain closed to you. I am now working for the Konrad Adenauer Foundation. I would never have received the job otherwise.

And do you want to persuade other Mongolians of the benefits of the German language?

Yes, exactly. Together with my two PASCH alumni friends Uyanga Bayasgalan and Bolor Tumendalai we developed the project “More German in Nomad Country.” We would like to stimulate interest in German language and culture with film evenings, readings and drawing competitions.

With this project idea you have become one of the winners of the PASCH alumni competition. Congratulations!

German as a foreign Language

Do you want to learn German? This is where you will find out who offers German courses all over the world. And there is information on culture and society as well.

Information about school and education

Anyone who wants to find out more about the German school system and educational policy will find all the information they need at these portals.