Simply reaching out to people

In Berlin, “Kiezmütter” are out and about: they provide help to families with an immigration background – and also do themselves some good.

Germany. In this family there are a lot of mothers – more than 500, to be exact. The initiative Kiezmütter (Neighbourhood Mothers) has trained this many women since 2006. The women help immigrants in Berlin to integrate themselves in the surrounding society. They aid them in registering their children for school, finding doctors, doing paperwork. And they bolster one another. “We’re one big family”, says Saber Fattahy, who launched the initiative.

It all started in the Berlin districts of Mitte and Moabit [im Berliner Bezirk Mitte, im Ortsteil Moabit. Each is a district; Moabit isn’t part of Mitte.]. Many people with immigration backgrounds live there. Often they have difficulties organizing their daily lives – because they are unaware of services and procedures, because they cannot speak German well. Here the “neighbourhood mothers” step in. They speak to the families and often swiftly gain their confidence. The neighbourhood mothers themselves frequently have immigrant experience, having come from the same countries as those they are helping – Iran, Afghanistan, Syria, Iraq and Sri Lanka. “All the languages spoken in Moabit are also represented amongst the neighbourhood mothers”, says Saber Fattahy, who came to Germany from Iran.

The neighbourhood mothers don’t wait for the families to come to them; they go to the families. Are they always welcomed with open arms? The men are sometimes sceptical at first, says Fattahy; “but usually they soon realize we really only want to help and have no political or religious agenda”. 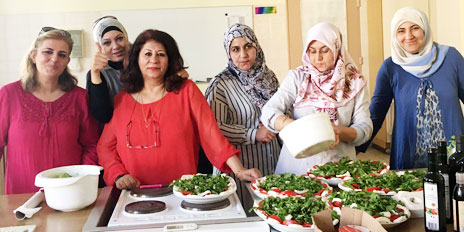 In the meantime, Kiezmütter are also making their rounds in other Berlin districts. The initiative is supported by a foundation and the Federal Employment Agency, so that the neighbourhood mothers can receive a salary for their work. Before they begin, they receive six to nine-months of training. It comprises languages, a computer course, educational and nutritional information, and a survey of services offered by the city, which they can later pass on to the families. Qualification as a neighbourhood mother also includes a four-week internship – for example, at a kindergarten or a doctor’s office.

“The work is a gain for the women”, says Fattahy. Through it, she explains, they have often found new paths for themselves. The initiative therefore wants to continue to train 20 to 40 women annually. Saber Fattahy has a dream: one day, “Kiezmutter” will be a real, recognized profession.

The citizens’ portals show how and where citizens can commit themselves as volunteers. If you’d like to have a say too, you’ll find information and contact addresses here.
Read more