The department of Norte de Santander is a remote, largely rural area in northeastern Colombia, hundreds of kilometres from the capital city Bogotá. The coronavirus has raged especially strongly in this corner of the country – among other reasons, because large numbers of refugees from Venezuela are living in cramped conditions and without access to sanitation in this border region. At the same time the department lacked test capacities. That is why the German Epidemic Preparedness Team (SEEG) travelled here especially in May 2020. The experts brought 20,000 corona tests and advised laboratories on using the new procedures. “The pandemic will only be over,” said one of the doctors involved, “when it is defeated everywhere.”

Germany is contributing to the global containment of the crisis in various ways. After all, the conclusion that the pandemic affects all people worldwide but not all in the same way may be constantly repeated, but it is no less true for that. Together with its European partners and as part of the G7 and G20, Germany is supporting other countries in addressing the crisis. “If we stand together worldwide, we can control and overcome the virus and its consequences,” said Federal Chancellor Angela Merkel during the G20 summit in November 2020.

SEEG is only one of many examples of how Germany is contributing to the global struggle against coronavirus. The team of experts trains la­boratory staff and supports the development of diagnostic capacities. The participating experts can draw on a great deal of experience here: SEEG was created in 2015 on the initiative of the Federal Ministry for Economic Cooperation and Development (BMZ) against the background of the Ebola epidemic in West Africa. It is realised by the Deutsche Gesellschaft für Internationale Zusammenarbeit (GIZ), the Bernhard Nocht Institute for Tropical Medicine and the Robert Koch Institute. In past years, the experts have combated plague in Madagascar, Lassa fever in Nigeria and Zika virus in Latin America.

We will not defeat the pandemic – and we will be forced to fight an increasing number of variants – if we don’t ensure that vaccines can reach all people in need, including in fra­gile environments.

The Institute of Virology at Charité – Universitätsmedizin Berlin has also become involved since the outbreak of the coronavirus pandemic. In the meantime, exchange between the Berlin experts and public health institutions has taken root in Colombia. This shows how ad-hoc solidarity at the beginning of the pandemic – when Germany sent medical technology and protective equipment to partner countries and German hospitals took in intensive-care patients from Italy and France, for example – has long since been transformed into global, long-term support. It does not only involve assistance in the medical field, but also research cooperation, technology exchange – for example, for contact tracing – and economic stabili­sation measures.

The latter is now increasingly becoming a focus of attention in Latin America and the Caribbean. “The pandemic has caused an economic and social shock there that is intensifying existing crises and threatening to take the region back 10 to 20 years,” says Marian Schuegraf, the responsible Regional Director at the Federal Foreign Office. The International Monetary Fund forecasts negative growth of more than -8% for the region. That is why Germany is engaging in close dialogue with governments there. “Together we want to ensure that the region emerges from the crisis stronger,” says Schuegraf, “for example, as a result of cooper­ation in the areas of climate protection, digitalisation and social inclusion.”

Support for countries in crisis

The pandemic is also creating urgent challenges in Africa. Although the effects in the health sector have so far proved less catastrophic than feared, the economic and social impacts have been all the more disastrous. The Least Developed Countries Report published by the United Nations at the end of 2020 warns that the development successes of past decades are under considerable threat. “The world’s least developed countries are experiencing the worst recession in 30 years,” claims the report. The Agenda 2030 goals – for example, with regard to nutrition, education and gender equality – are at risk of being delayed far into the future. 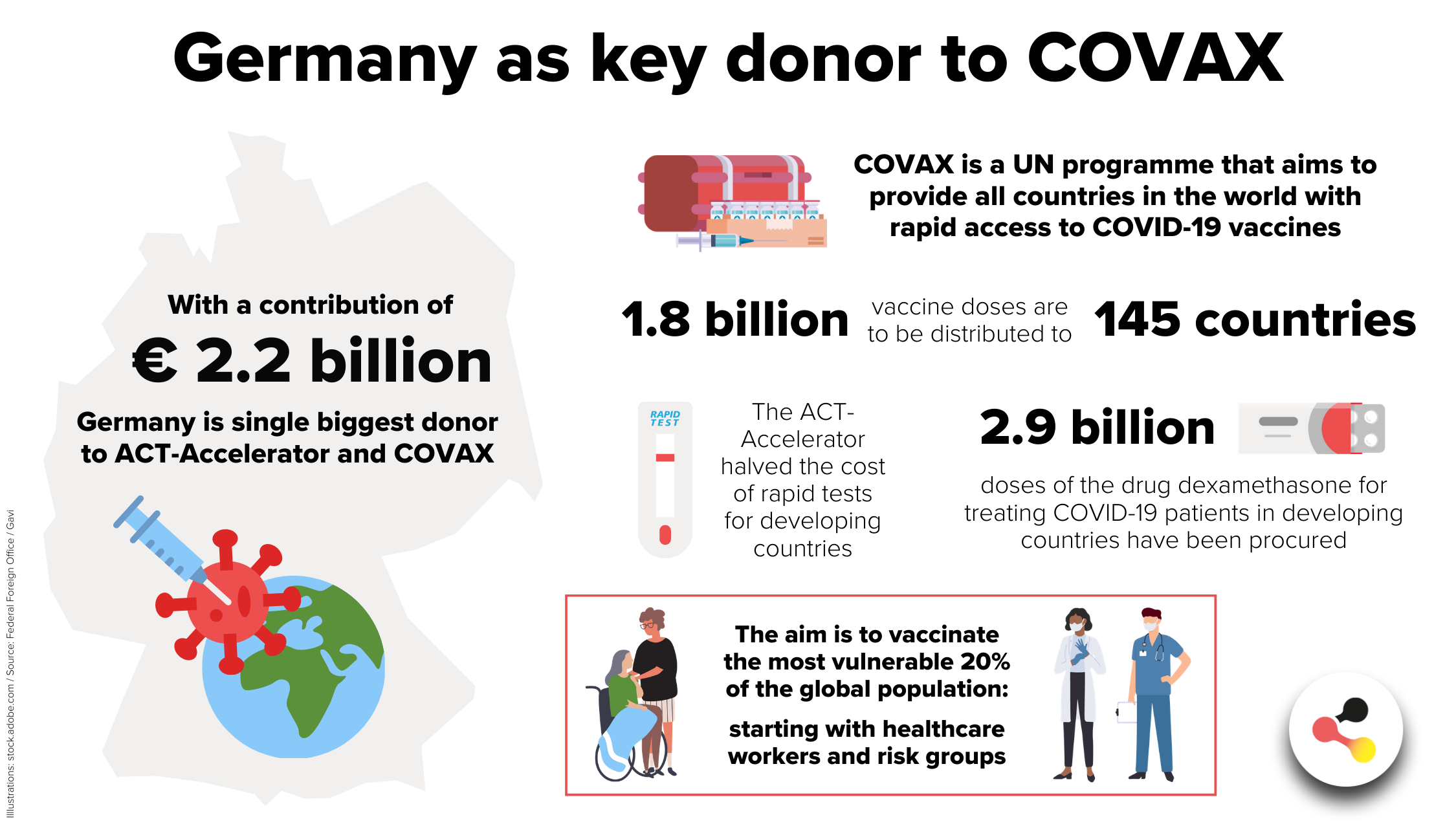 That is why Germany has increased its commitment to development cooperation. Immediately after the outbreak of the pandemic, the BMZ made available over 1.5 billion euros of addit­ional emergency relief. A sum of 1.5 billion euros is also planned for 2021. This support is ­being ­concentrated on crisis countries in Africa and other regions, especially on countries where large numbers of refugees are living.

In the medium and long term, it is especially important to preserve jobs. That is why the BMZ launched its COVID-19 Response initiative as part of its developpp.de programme. The initiative supports entrepreneurial strategies that mitigate the effects of the pandemic. Together with Fairtrade International and Forum Fairer Handel, the BMZ has also set up a fund of 13 million euros to help small farms. Countries that are especially dependent on tourism are also receiving support. In Tunisia, for example, where some 400,000 ­people were still working in the hospitality sector at the beginning of 2020, the GIZ is advising
the ­appropriate ministry on introducing hygiene ­regulations for hotels and restaurants to strengthen the sector and secure jobs.

In addition to bilateral projects, Germany is also actively supporting especially hard-hit countries within the framework of Team Europe. In ­December 2020, for example, the EU announced a 20-million-euro programme to strengthen the health systems in the member states of the Asso­ciation of Southeast Asian Nations (ASEAN). The EU pledged 92 million euros to the countries of the Sahel zone in order, among other things, to mitigate the socioeconomic effects of the pandemic. Furthermore, 25 million euros have been made available to contribute to overcoming the pandemic, accomplishing the transition to democracy and achieving medium-term development goals in Gambia.

Solidarity also plays a crucial role inside Europe. The EU member states are working together in many areas: for example, in the coordin­ation of containment measures, the mutual recognition of rapid antigen tests, vaccine procurement for all member states and, not least, in limiting damage to the economy and promoting economic recovery. The Eurogroup already allocated 540 billion euros for this purpose in April 2020. Soon afterwards, in July 2020, the EU member states agreed a package worth a total of 1,824 billion euros. It includes the seven-year plan for the current EU budget until 2027 and the Next Generation EU recovery fund, which alone has 750 billion euros at its disposal. “This is a sign of trust in Europe and a historic ­moment,” said European Commission President Ursula von der Leyen.

Cooperation is also crucial when it comes to the most effective means of fighting the pandemic – vaccination. On one hand, the EU countries are acting together by procuring vaccine for all member states. On the other, the European Commission, Germany and other EU members have joined the COVAX platform as part of the Team Europe approach. Under the leadership of the Global ­Alliance for Vaccines and Immunization (GAVI), the Coalition for Epidemic Preparedness Innov­ations (CEPI) and the World Health Organization (WHO), it is accelerating the development of vaccines and supporting their fair distribution. ­COVAX is part of the Access to COVID-19 Tools Accelerator, an initiative that also improves worldwide access to medicines and diagnostics. Germany is already contributing 600 million euros to the ­initiative and announced a further 1.5 billion euros in February. Germany is therefore the initiative’s largest single donor at the present time. “We need to overcome this pandemic in a spirit of cooperation, not in the spirit of ­‘vaccine nationalism’,” said Federal President Frank-Walter Steinmeier at the opening of the World Health Summit in October 2020.

Here Germany is acting on the principles of solidarity and multilateralism. However, it does so equally in the knowledge that the pandemic will keep returning to Europe again and again while it has not been overcome worldwide. Biontech, the German vaccine developer, also insists on a broad distribution of its vaccines. “From the very beginning, we have been saying that we see ourselves as a global company and will make our vaccine avail­able worldwide,” said Biontech co-founder Uğur Şahin in an interview with Der Spiegel, the German weekly news magazine. “If 500,000 cans are destined for a developing country, then they have to actually get there.”

While the world continues in its efforts to contain the pandemic and its impacts, the multilateral perspective is also looking towards the future. The European Commission is planning to build a European Health Union that will provide common emergency plans, for example, to improve the responsiveness of the community. And the G20 countries have asked the WHO to make recommendations in preparation for a new global pandemic initiative. The declaration says this could close existing gaps in the international system. The world wants to learn from this crisis.

Improving the world through business

GoodBuy aims to do business in a climate-friendly and socially responsible way. Founder Simon Böhnlein explains how this enabled him to make it through the corona crisis.
Read more

My wish: a return to normality

People in Germany have had very different experiences of the corona pandemic. Today we present one doctor’s view.
Read more

Maintaining a window on the world

How important is culture during the corona crisis? Artistic Director Shermin Langhoff describes how the Gorki Theater is reaching audiences in new ways.
Read more