An overview with the most important facts about newspapers and media consumption in Germany.

Germany. Freedom of opinion and freedom of the press are considered a precious good in Germany. As a fundamental element of democracy they are anchored in Article 5 of the Basic Law: “Every person shall have the right freely to express and disseminate his opinions in speech, writing and pictures, and to inform himself without hindrance from generally accessible sources. (...) There shall be no censorship.”

The press and art do not belong under government supervision. If you argue anything else you are manoeuvring free society towards ruin.

Georg Baselitz, artist and designer of the motif for Press Freedom Day 2018 in Germany

Newspapers, radio and TV in Germany

Newspapers are not managed by the state, but run by private media companies. There are two types of radio and television operators. On one hand, there are public broadcasters that have a duty to deliver basic provision of independent information, education, culture and entertainment. Every household in Germany has to pay a fee for this service. In addition, there is a broad range of private radio and TV broadcasters with programmes financed by advertising.

Publishers, editors and journalists have a great responsibility towards society. They inform the public, contribute to opinion formation and freedom of opinion, and expose abuses. The journalistic and ethical standards for their work are laid down in the Press Code. The German Press Council is responsible for ensuring observance of the code. Readers attach importance to this: according to a representative survey by the Allensbach opinion research institute, nine out of ten German citizens consider high-quality journalism important for democracy and society in Germany. The OSCE has also praised Germany’s diverse media landscape and high journalistic standards: it says they are successful in limiting the effects of “fake news”.

and 23 weeklies are published in Germany.

make up the range of all regularly appearing newspapers and magazines.

are printed in Germany every day.

of Germans regularly read a newspaper.

are spent reading the newspaper by the average German on weekdays.

are sold every day. The proportion of digital newspaper subscriptions is increasing.

The wide range of newspapers and magazines is a reflection of the diversity of opinions: 323 daily newspapers, 23 weekly newspapers and six Sunday newspapers inform people not only about global affairs, but also about local events where they live. Together they have a circulation of roughly 19 million. In addition, there are also 1,626 popular magazines and a growing range of specialist publications with a current total of 5,600 titles.

Germany has the fifth largest newspaper market in the world, after China, India, Japan and the USA. According to figures from the Federation of German Newspaper Publishers, newspapers – in printed and digital form – reach three quarters of the German-speaking population every day. 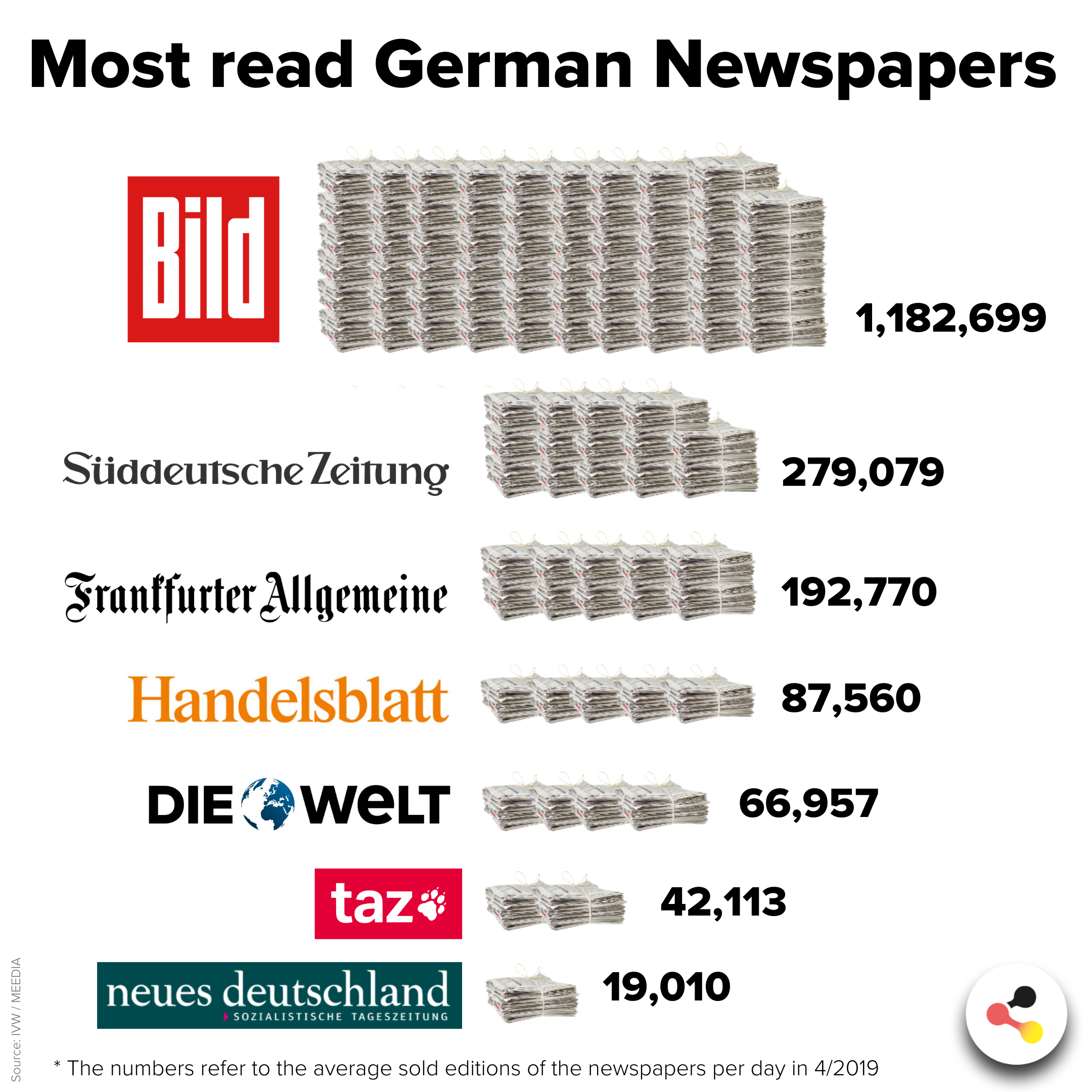 The circulations of printed newspapers are falling because more and more people read their papers online: one in two Internet users in Germany regularly use the online services offered by newspaper and magazine publishers. Alongside their printed editions, they currently operate almost 700 editorial offerings on the Internet – websites, e-newspapers, smartphone apps – and distribute news on social media like Twitter, Facebook and Snapchat. 1,45 million newspapers are sold as e-newspapers and this number is steadily increasing. The future is digital: half of all publishing houses are currently planning new editorial offerings.

Information about print media in Germany

World Press Freedom Day on 3 May

The wide range of daily newspapers in Germany is a reflection of the diversity of opinions. Overview and links to important national newspapers.
Read more

The future of the media

The media that young people use

These are the most popular apps and media habits of German digital natives.
Read more