Their working day consists in computer games: three young people give insights into their training at the Games Academy in Berlin.

Germany. With more than 300 student projects in 17 years, the Berlin Games Academy is Europe’s most productive centre for games. A programmer, a designer and a producer explain how much invisible work lies hidden in every computer game. 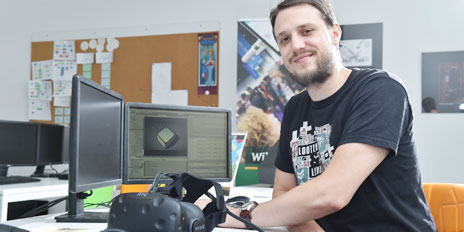 What does the training of a game programmer look like?

We learn the programming of networks, writing your own engine, game logic and programming for mobile devices. Following a week of instruction, there’s a week when we develop a game as a team. Then we all sit down together: designer, artist, producer and programmer.

How long does it take to create a game?

Usually two years or longer, depending on the game’s scope. At the Academy, we have only half a year for a project. That’s unfortunately too short a time to develop a game to the point that it’s ready for the market. On the other hand, we’re now trying to do this in the two-semester project Super Dashmatch. If it works, the result would be useful for future job applications.

What did you do before attending the Academy?

I studied architecture and worked for three years as a media designer and team leader in digital printing. I’ve always been a passionate game player and so definitely wanted to work in the industry. I’ve made my hobby into my job. 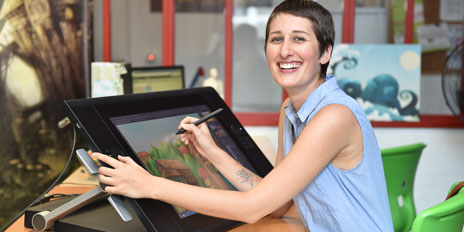 As a digital artist, you’re the artist in the game development team?

When it comes to the concept, yes, I am. At the start we think about the appearance of a figure. What hair colour should she have, what sort of clothes, what should the surroundings look like? You have to come up something.

And then put the idea down on paper or on-screen?

Right, today this happens mainly through 3D programmes. We learn how to do that at the Academy. Before this, I was trained in traditional animation. Like in the old Walt Disney films; every single movement drawn by hand and filmed. Today, we create visual images using a mouse or a tablet. You don’t even have to be able to draw well! To use 3D programmes you need instead technical skills.

What must a good digital artist be able to do?

It’s no different from any other creative profession such as photography. You have to be able to meet deadlines, accept hierarchies and work in a team. Especially during the conceptual phase there’s lots of discussion and racking of brains. The figures that we’ll create have been thought up by somebody else. The request “We’d like a girl” means a power woman like Lara Croft to one person and a cute figure like Heidi to another. Finding a solution here is a big challenge. 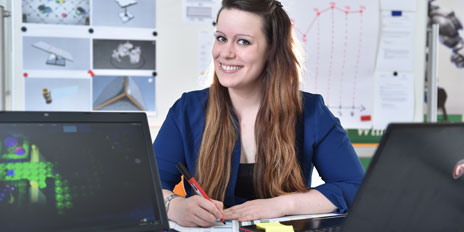 What is the job of the game producer?

I do everything that the creative colleagues don’t like to do: I make sure that we stay within costs and keep on schedule. The best way to describe my work is as “in time”, “in budget” and “in quality”. I like to explain it with the following metaphor: the artist, the designer and the programmer go into the street and I walk alongside and take care that everything forges ahead. When obstacles arise, it’s my job to clear them out of the way.

It is. The game producer has to keep an eye on all areas, from the conception to the release of a game. This requires a certain amount of life experience and authority. Before attending the Academy, I completed two courses of training, one in hotel management and one in office administration. After that I worked in accounting and human resources. This has certainly proven an advantage. Being a game producer gives me the opportunity to combine things I like doing: gaming, organizing, and calculating.

What do you learn at the Games Academy?

Cost and risk management, project management, and everything about copyrights and licenses. I need this to make the right decisions in my work. In stressful situations, it’s important to have an overview and keep a cool head. You can’t be shy of confrontations, have to communicate clearly and also sometimes have to assert your authority. For me, it’s very important in all this to have a positive idea of people. I see myself as an accompanist.

These portals help you find events and give you ideas for spending your free time.
Read more