How families live in Germany

Why many Germans do not become parents until late in life, and how families are supported by the state.

Germany. A married couple with one or two children – that is the average German family. But family models are becoming more diverse: According to the latest Family Report, Germany had around eight million families with children below the age of 18 in 2015. Though the majority of parents are married (5.5 million), it is no longer uncommon for unmarried couples to live together (843,000). Besides the average family model, there are also many single parents (1.6 million). Most of them are women (1.5 million), with only around 11 percent of children being raised by only their father. The number of same-sex couples with children is still comparatively low in Germany, though it has more than doubled since 1996 from 3,000 to 7,000. By contrast, the number of extended families with several generations living under one roof has declined since 1995 from 351,000 to 209,000.

The majority of families nowadays describe their economic situation as being good or very good. In actual fact, families’ average (needs-weighted) per capita income rose by just under 23 percent between 2004 and 2014, according to the report. 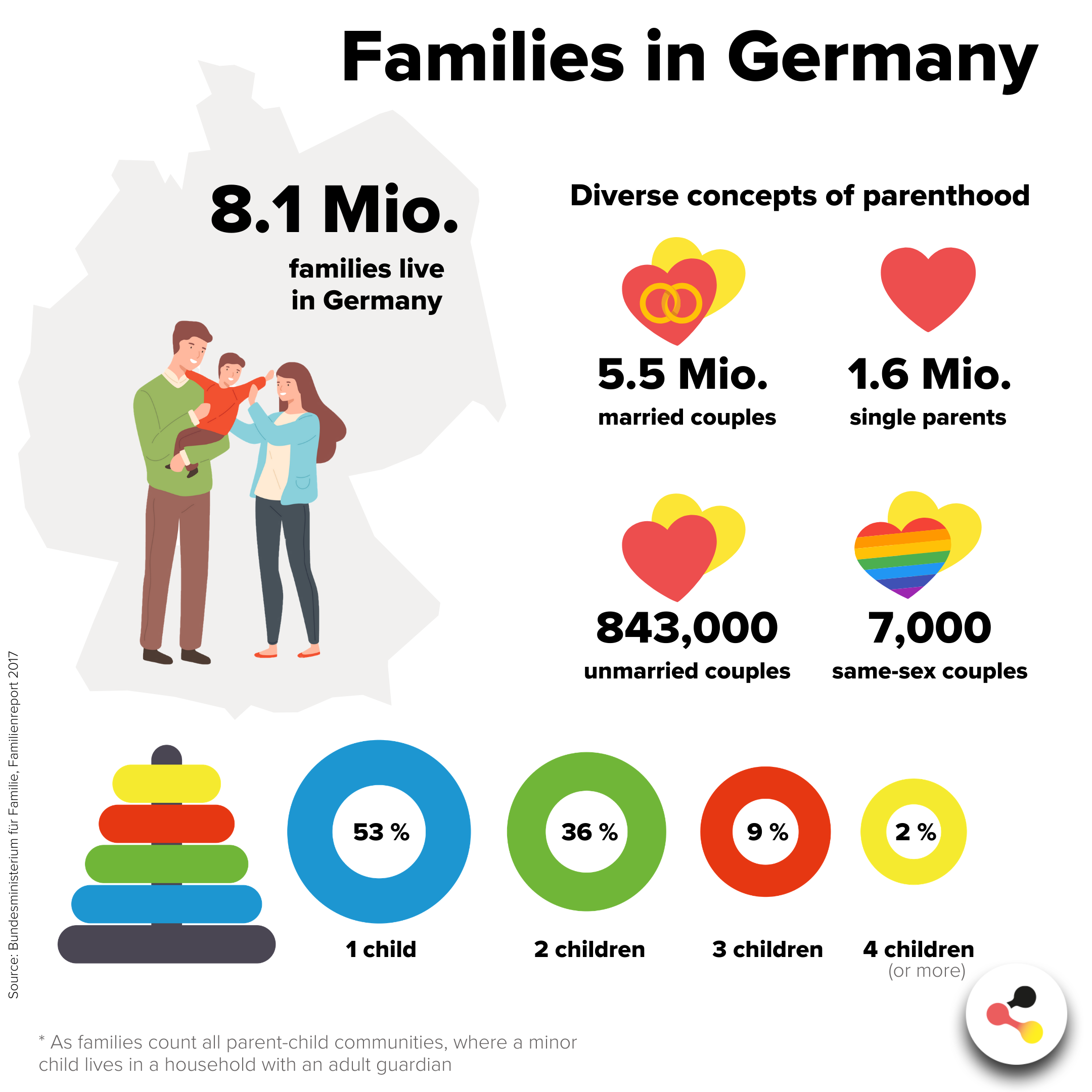 Many young academics in particular put off starting a family – they first want to complete their university studies and then start a career. As a result, on average mothers are already almost 30 and fathers 35 years old when their first child is born. This is also a reason for the small average number of children per family; for 53 percent of families in Germany have only one child.

How the State promotes families

Germany needs more children; it is the country with the oldest population after Japan. Although, at 1.5 children per woman, the birth rate is at the highest level since reunification, it is still lower than the EU average of 1.58.

This is why there are a large number of state aids aimed at promoting families. The most important are child allowance, parental allowance, tax incentives, and subsidies for pregnant women and families whose income is too low to meet their children's basic needs. School education is free.

Despite such support, single parents are among the population groups with the highest risk of poverty if the other parent refuses to pay maintenance for his or her child.

Parents between family and job

Children or career? Policy-makers have been trying to make it easier for women and men to reconcile the two. Since 2013, every child has had a legal right to a kindergarten place from their first year. Germany's federal states have invested heavily in the expansion of childcare for infants and school children.

Since 2007, mothers and fathers have been able to take a paid break from work. The state pays a parental allowance amounting to 65% of net income for a total of 14 months.

Father earns the money, mother stays at home with the children – this role model is regarded as outdated, but it still exists. Although 70 percent of mothers go out to work, 40 percent work only part-time. A change is emerging: the generation of young fathers would like to spend more time with their children and be more involved in their upbringing. Currently, as many as one in three fathers takes advantage of the parental allowance for two to three months.

Did you know that…

… Noah and Hanna were the most popular children’s names in Germany in 2019?

… July is the month with the highest birth rate in Germany?

… 93 percent of children from the age of two are enrolled in some form of child care facility?

What is German Gemütlichkeit? Find out what a typical living room looks like and which piece of furniture is a must.
Read more

How the state makes sure that children can lead a good life.
Read more

How young Germans want to work