Because of the corona pandemic, many creatives fear for their livelihoods. This is how the Federal Government is helping creative artists internationally.

The Federal Government is supporting creatives in Germany and abroad. Farknot Architect - stock.adobe.com

Culture can unite, especially in times of crisis; it can help us to reflect on the world or to forget it for a few minutes. But because of the Corona crisis, concerts are being cancelled worldwide, theatres, museums and galleries remain closed. From Tokyo to Berlin, many artists are worried about their livelihoods. To ensure that the creative industries are maintained and that creative artists can weather the crisis, the Federal Government is supporting them in Germany and around the world.

Billions of euros in aid have been approved for creative artists in Germany, as well as further support measures for the solo self-employed and micro-businesses, and easier access to basic social security benefits. You can find more information here.

The Federal Government is also supporting culture outside of Germany. In order to give more support to cultural workers across borders, the Goethe-Institut, Germany's globally active cultural institute, is moving many of its activities to the internet. "It's about maintaining cultural exchange despite the closure of physical borders in most countries," says Jessica Magri Kraatz from the Goethe-Institut. This is the aim, for example, of an international project called ‘Time to listen’. For this literary video series, the Goethe-Institut invites international writers to tell a story – among them T.C. Boyle from the USA, Herta Müller from Germany and Ken Follet from the UK. The project ‘Day-Afterthoughts’, on the other hand, collects visions of the future from international creative artists and intellectuals.

Recently, the Goethe-Institut also launched a digital platform called kulturama.digital, where artists from all disciplines can present their events to an international audience – whether it's a concert in a Berlin living room, a virtual exhibition tour in New York or an online film lab from the Philippines. Viewers can make a donation and in this way financially support their favourite act.

In addition to globally oriented projects, the Goethe-Institutes also offer a wide range of activities in individual countries: for example, online house concerts in Hong Kong or a webtoon comic series featuring Korean and German illustrators. 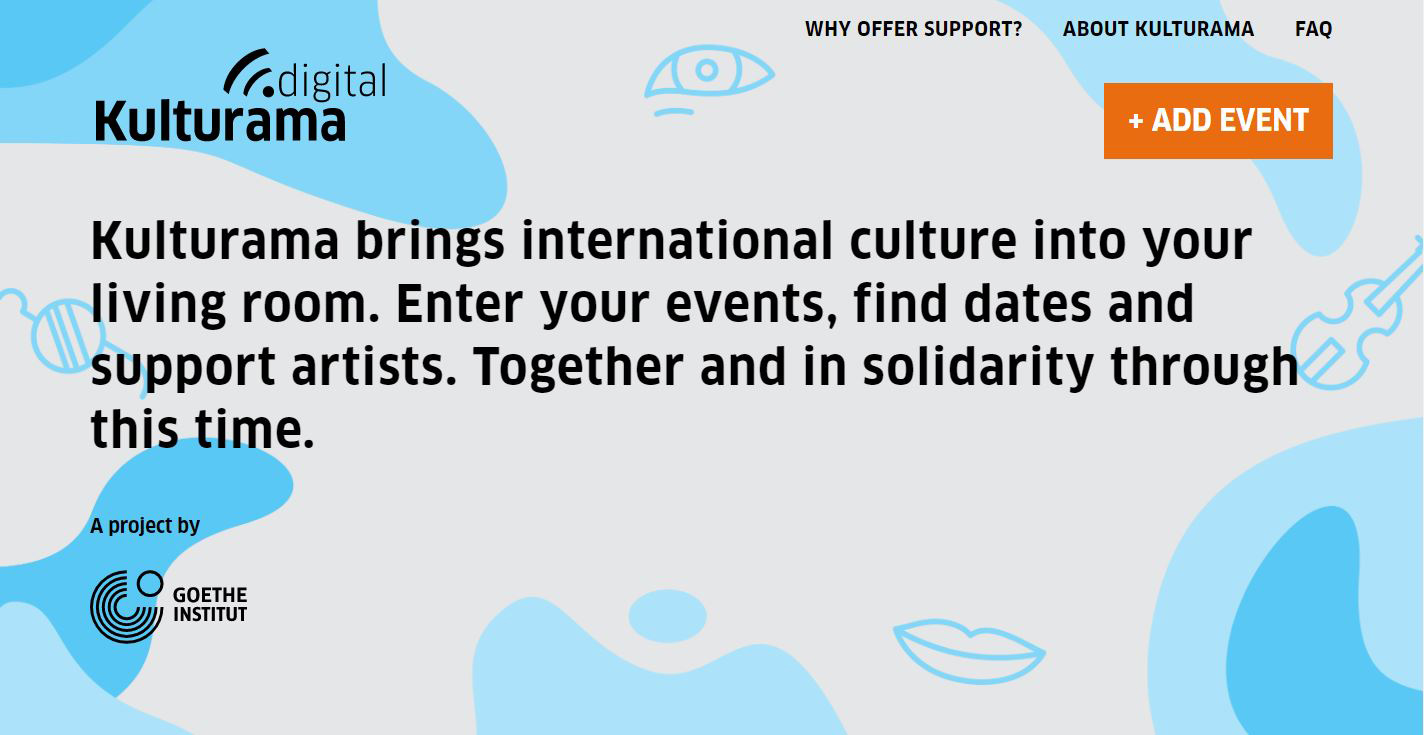 Classical music to enjoy and play along

Whether it's ballet lessons or concerts, classical music fans can enjoy exciting entertainment during the quarantine.
Read more

All alone with Nefertiti

Classical antiquities in 3D und Monet’s water lily pond as a virtual reality experience: what German museums are offering in digital form. Some tips from our editorial team.
Read more

Going to the theatre in your tracksuit trousers

Now you can go to readings, zoos and concerts online. Here are some events and tips to help you through quarantine.
Read more